Python vs Java: Who Is Winning the Battle of Codes?

Python Vs Java. If you ask someone which is better, you would obviously get a simple answer. That is “It depends”. But you would get a straight answer in this blog. 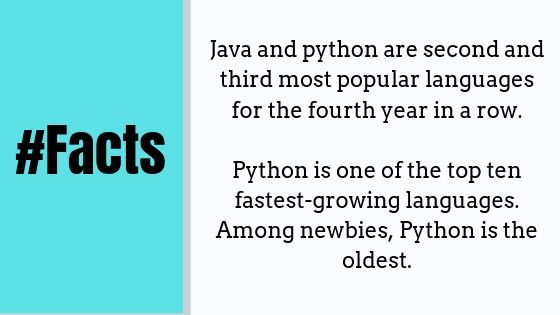 In TIOBE Index’s 2019 list, java tops the list and python has got to 3rd place from 4th.
Digital Ocean’s recent language survey says python tops 2nd position on the list of languages preferred by developers and java dominates the other languages.
But python has been taking over the tech market for the past two years with a steep upward trend. And also python is prefered for web development than PHP recently.
So, both of the languages are popular for their own features, pros and cons. And the obvious answer is “it depends”.
Confused right? Let’s break the blog into clear blocks explaining what are the factors that it is actually depending on.
Firstly, both of these languages have many similarities. Some of the similarities between java and python are that they both hold strong cross-platform support, extensive standard libraries and consider everything as objects. Despite the fact that python deviates a lot from C/C++ than java, they both belong to the same algol family.
Being the support for Python 2.x will end by January 2020, the community got no other options other than Python 3. Since oracle’s new release model for Java, there’s been a lot of confusion within the software industry. The unified java community is now fragmented than python ever was.

One of the major differences between python and Java despite that they both are object-oriented languages is that python uses dynamic types while java uses static. But this difference significantly affects how you design, write and troubleshoot programs.
What are the advantages of dynamic and static typing?
Static type advantages –

The advantage behind dynamic types is that it tends to be less verbose than static languages. Considering the fact that the variables are not declared with types, type conversion is made simpler.

Python vs java in Code readability and formating

Python is very easy to write and not bad to read, but analyzing is difficult with it. While the static type inference in Python is considered a hard well-known problem.

Python vs Java in Whitespace

This whitespace is related to python’s syntax which uses tabs for nesting and a full colon to start loops and conditional blocks. In the case of java, it ignores the white space and uses semicolons, parenthesis and curly braces. On the other hand, this makes it easier to read and understand the code. But coding in python is more concise and uniform than java due to its limited formatting choices. Mostly, python codes are shorter than java which is a major advantage when the programs are especially scaled up. This difference is mostly because of the absence of closing braces.

Python vs Java in Brevity

Brevity is how both languages handle files. To declare the file, both java and python create a block, the file source remains in scope and enclosed within the block.
In python, the file opens, reads it and then exits the loop when it reaches the end.
With java, the process is more complicated. You need to add a line of code to check for null at the end of the file.
Furthermore, python ables to read the entire file from the beginning but java requires at least one entry point “main”, a static method to run.
This shows that handling text files is easier with python than java. This again proves that Java is a verbose language, especially when manipulating files or retrieving data from web resources.

Python vs Java in Performance

Both the languages, java, and python are cross-platform for being able to compile to bytecode and run in virtual machines. But the major difference is that python compiles code at runtime while java does it in advance and then distributes the bytecode.
Most JVMs show enhanced performance than python with its just-in-time compilation to programs. A variant of python known as PyPy can do this, but not the mainstream python. Even though this argument is subjective, a simple binary tree test runs 10X faster in java than in python.

Which is the future? Which is the best choice for the developers?
To answer which one is the future, we need to consider the latest developments of both of these. Oracle’s latest support model might change the developer’s mind because the support model is not free anymore and java clients got to pay oracle for support and regularly change OpenJDK versions or rely on third parties for fixes or security updates.
But Python is now taking over the market with Python 3, rectifying hurdles to give the developers a unified support model powerful than java.
Python’s dynamic type and Java’s static type is subjective. It is up to you to figure out which one is best suited for you, your developers and the project type.
Python’s syntax is more concise, easier and quicker than java. When it comes to performance, Java takes advantage over Python.
By considering the above-mentioned factors, Python overweighs with its advantages.
Hire best Python developers for your web development projects easily with Agira technologies. We provide you with dedicated experts who have mastered the latest technologies. Endure the fullest of outsourcing tech experts for your company. Get in touch with our experts to hire freelance python developers, offshore python developers and python web developers who can cater to your company’s requirement.

Read more blogs related to Python such as 7 Reasons Why Python Beats PHP for Web Development and Developing RESTful APIs with Python and Django. Get regular updates by subscribing to us.

Top Panda Functions You Should Know