Apple: 7% Price Down In a day - Real Reasons From An Apple Fan 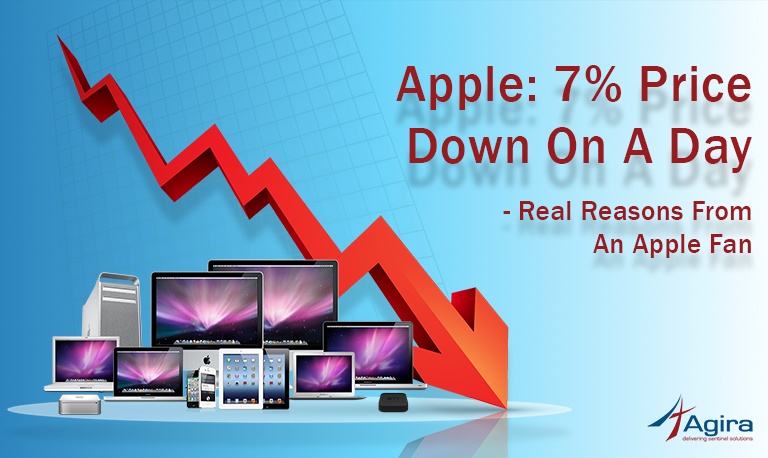 Apple: 7% Price Down In A day – Real Reasons From An Apple Fan

Apple share price fell about 7% after a trade, there will be a bloodbath as apple downgraded its sales numbers.

I had liked apple products from the day it was released and right now am having all apple products on my table that are released from Apple so far. Also, am one of the authorized users who experienced and enjoyed all it features for years. I won’t say am a serious apple user but I could say that am a legitimate user of any products or technology that comes with a valid token that satisfy my permissible requirements. After analyzing & watching everything I had liked to share a few of my personal opinions for not buying more Apple products in recent time. You could also check Tim Cook official letter to Apple investors here.

Apple has outpriced all its competitors, I have not updated my MacBook Pro for 4 years, not upgraded iPhone for 3 years, never bought iPad Pro, watch, air pods. bought last years MacBook Air, 2018 iPad instead.

16gb 512gb SSD i7 was launched in late 2013, higher specced version was launched only in 2018, with 32gb 4tb SSD costs over 5 lakhs. Bought a cable wrap for old MacBook pro charger and kept it at home, bought another charger for office so that I carry backpack light.

I loved iPhone 5 form factor, not a fan of huge phones. So would probably never buy any Max phones ever. Batterygate happened, even before that Apple gave free replacements of a battery to some phones including my 6s. So have got my battery replaced 2 times, not very happy with battery life as it does last full day for my usage.

[ctt template=”12″ link=”fu28J” via=”no” ]Instead of upgrading phone I bought a battery pack and two lightning charging cable small and long ones colored, braided ones from amazon basics because they last longer than Apple plasticky/rubbery ones.[/ctt]

[ctt template=”12″ link=”oWmCL” via=”no” ]High-end iPad Pro costs 1.7 lakhs, not including the Smart Keyboard and new pencil which would cost another 30k but still won’t replace my MacBook for development use.[/ctt]

I bought an iPad 2018 128gb with older pencil and cover for under 40k 10k less than list price again due to online offers, Indian ISP’s possibly block UDP connections so my MOSH /SSH experiment has not succeeded yet. But have moved my email, reading, and video streaming apps to iPad. 128gb because streaming is jittery so download content then watch. This is my 3rd iPad.

Watch sounds good but at about 50k is too pricey for the LTE model. Air Pods look great but newer one is expected in January and for 12000 bucks I want noise cancellation headphones.

I have bought apps for over 1 lakh on App Store for Mac and iOS. I am fine buying app if it serves one purpose well. Many app developers have moved existing features to pro and instead of one-time purchase that are charging 3-5$/month subscriptions.

Coloring apps subscriptions are not what I signed for. I stopped using 1Password after they started subscriptions. I stopped buying apps from outside App Store as they kept charging when Apple OS updates those apps stopped working.

I want to use professional apps occasionally and want to pay per use as I pay for my AWS lambda, not EC2. Adobe & Microsoft I am talking to you.

Apple can reduce pricing by 10-15% or give credits so that people can use it for accessories and apps.

Until it gets price right, market like India can never grow for Apple.

Please don’t comment on Microsoft, windows or android. Don’t get me started.