How Django became an outrageous subject in the basecamp of web developers? If you’re one of that basecamp, this blog will make you glad. A beginner? Still, everyone has something to take from here!
Finding suitable tools for a project can be a challenge. But, Django may not be an ideal solution for all. Let’s move towards a better understanding of what, why and how in Django a very popular python framework.
But, firstly you have to know, What is Python?
Python is an object-oriented, high-level programming language with integrated dynamic semantics primarily for web and app development. This multi-purpose language is continuously ranked among the top programming languages. This programming language gives a prefect framework with efficiency and readability. The language functions on its own philosophical principles, “The Zen of Python”.
(Take look at most popular programming languages ranked) 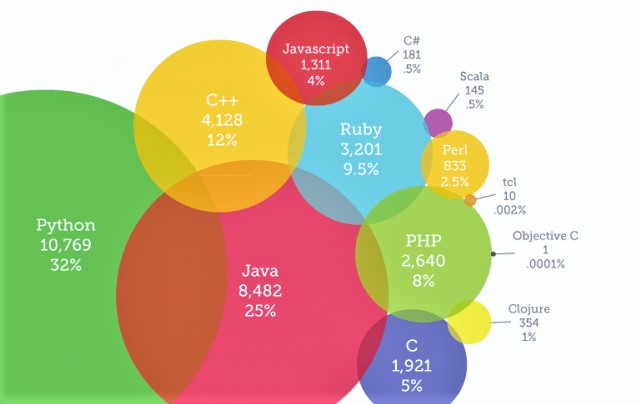 Wait! without any delay, we will feed your curiosity.

Django has gained popularity as a disciple of the Python framework. It is no secret that Django is a powerful Python language for web development. Django is a content management system, implemented in major industries for its versatility and quick actions.
Django has been used exclusively in web development. Here are some high loaded projects such as Youtube, Instagram, Spotify, Disques, DropBox, and Reddit that are developed in Django. And also, do you know where Django was first implemented? (Read and you’ll find!) 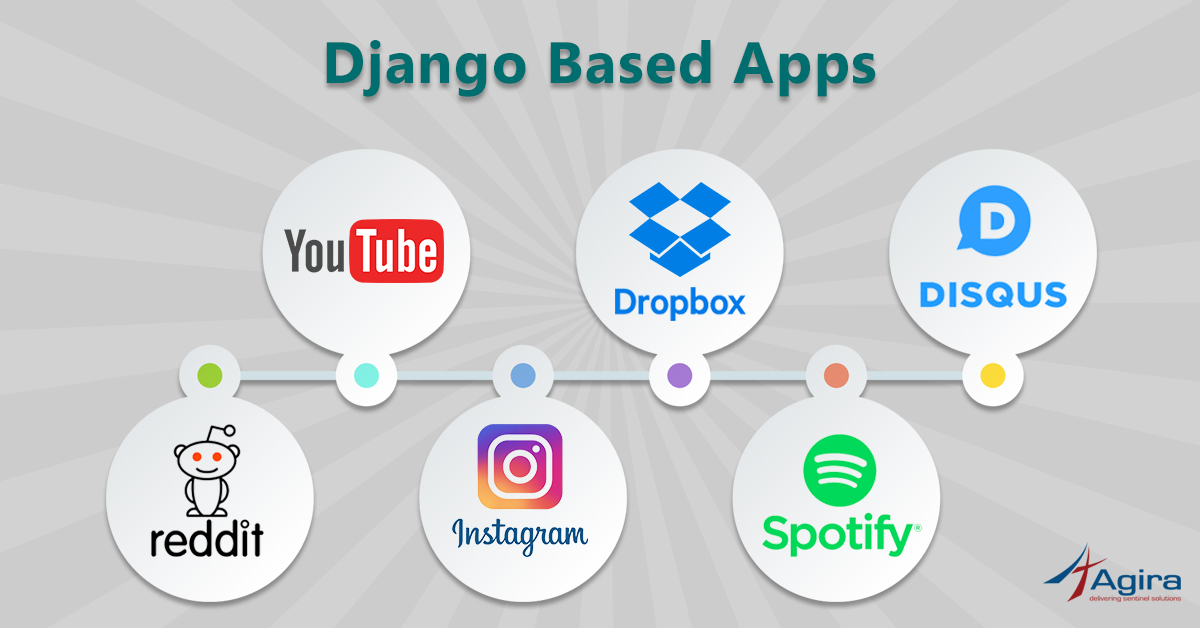 Why Django is a HERO for Developers?

Developers are in a constant hunt for the best tools and frameworks for web development. From time to time numerous developers have endorsed Django as a dynamic framework to work with. And it continues to top the list of frameworks for skilled developers.
With high-quality code writing, fast forefront web development, Transparency, and scalability (a few additional qualities) have attracted developers worldwide. The security levels in the latest 2.2 version of Django, ensure the safety of the project, making it a fully-featured package.

Let us begin with the pros followed by cons,
Pros

Besides the pros and cons of Django, When you want to complete projects with deadlines. The ultimate solution is Django. Businesses and developers have reduced 80% of the development cost by using Django. The better versions and updates are lining up from time to time.

The latest version is Django 2.2 LTS (long term support) released in April 2019, security release supported until 2022. That means security and data loss can be fixed with an upgrade of this version. You’ll receive fixes for crashing bugs, major functionality bugs in newly-introduced features and regression from the older versions of Django until December 2019.
Note it: Django professionals encourage users to upgrade beforehand and then continue to receive fixes for security issues.

Aren’t you curious about the Django’s history? We are going to tell you a great story then!

The Birth Of Django

Let’s travel back to 2003, where two developers with strong and contrasting opinions on Web development met at the Lawrance Journal-World newspaper. 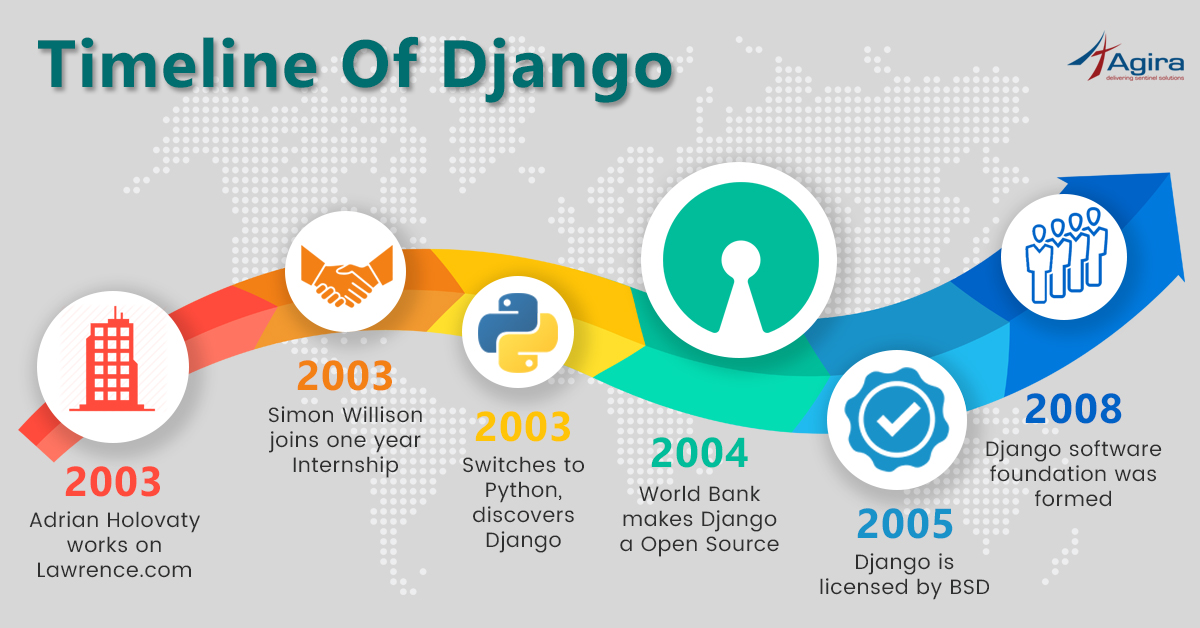 Adrian Holovaty was to build a perfect website for Lawrence.com using PHP. By that time, Simon Willison joins as an intern at Lawrance, through a university with 5 years of experience in PHP. They started developing the website together.
Wanting to do more than finding interesting URL’s and putting CSS to effective usage they moved around with their own working styles. Those curious minds came across Mark Pilgrim’s book “Dive into Python”.
Yes, it was love from the first few chapters!
Both got really fond of it and switched to Python. Using mod_python wasn’t convincing their gray matter. They needed an abstraction layer between the codes that cumulated in ‘Django HttpRequest / Http Response objects’. They cited Django as a ‘CMS’ and used it as a template language, resolved URL’s and also as a request/response objects.
Their utmost desire was to build a functional fit for Lawrence.com. And Rails was extracted. As a slight crack in the partnership, Simon’s one-year-long internship came to an end, he returns back to the University.
Before a month, Adrian and Simon hire Jacob, as a replacement. Adrian and Jacob started developing Django together. After a few months, Django made an official entry into programming. Lawrence.com was the first-ever site to go live on Django. And slowly was implemented Django on several sites.
Adrian named it after his favorite guitarist Django Reinhardt. And wished to make it an open-source for developers. He approached World bank to make Django an open-source. In 2004, World bank was listening to the big hit stories of Ruby on Rails and was really convinced about the benefactors of open sourcing. The conversation was a success.
In 2005, Berkeley Software Distribution (BSD) licensed Django. After some time the code generator was restored with smarter systems. Many versions were released from 2006.
Django Software Foundation was formed in 2008 to maintain Django of the future.

A good reason to Learn and Love Django!

Django is the right option for most of the software projects.
You can build a complex web application with Django that can handle heavy traffic and a high volume of data. It also comes with multiple additional tools to power edge technology such as machine learning and data analysis. We have provided you enough reasons why from our end.
How are you going to build your website? As a leading Python and Django web developing company we have trust in this technology. You can hire our skillful developers, who got to have produced many web solutions with Django.
There are a lot more articles on the technology available here. More updates on Django are yet to come. So, stay connected!

Python Vs Node.js: What To Choose & Why – A Detailed Comparison

Do you find this blog interesting? Don’t forget to share your opinions with our expert developers.