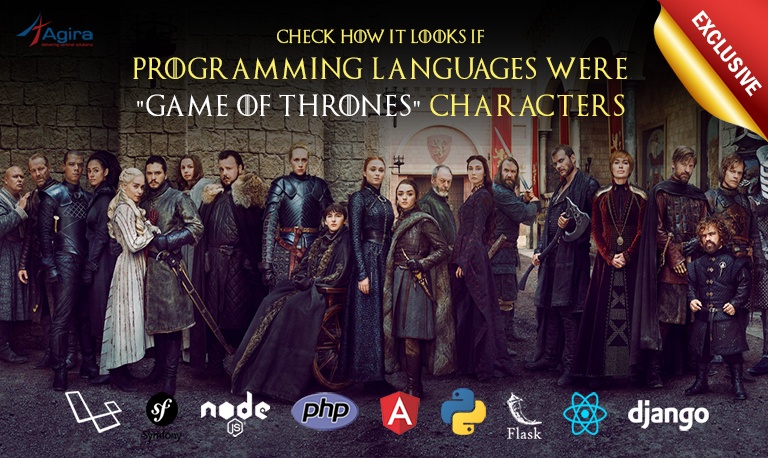 Are you a great fan of GOT?  I am definitely one of the biggest fans who are eagerly waiting for the Game of Thrones Season 8. Coming from a techie background, With a random thought I was thinking how it will look if programming languages are compared with characters in GOT series.

After the research of few weeks on technologies & continuous observing on GOT, finally i got stroked with an idea to predict the similarities between the characters of “Game of Thrones” and top programming Languages.  Guy’s it’s just a cold try & forwarding approach to show the face of programming languages to the world through our favorite characters of GOT. Things apart, I personally believe you will find it interesting. So without a pause, let’s jump into it!

JavaScript is like Tyrion Lannister – he is one of the most popular person in people’s minds, but usually the people who live in King’s Land will not trust him, moreover, they criticize him due to his strange physical traits.  Hope you might have guessed what I mean! Same goes for Javascript too. Certainly, some of his bad appearance and his unusual behaviors, as he is smart and innovative, he survived fighting the most “trial by combats”.

“Never forget what you are, the rest of the world will not. Wear it like armor and it can never be used to hurt you.” – Tyrion

Framework related to Javascript are React JS is like Bran Stark – He has overwhelming capabilities and might rule over the iron throne.

Angular is Jaime Lannister – Still adorable with a single hand which can handle 2-way binding and many more abilities, “The things I do for love.” — Jaime Lannister

Node JS is like Cersei – a powerful lady who will do anything to protect her family by any means likewise node js also powerful and extends strong supports over server-side scripting. “When you play the game of thrones, you win or you die.” — Cersei

Javascript gives new look to the application as it implies the same as the role of a white walker (gives new life to dead people by just one touch) in a Game of Thrones.

Ruby reminds of Melisandre – Contain some powerful magical abilities, particularly the power of forecasting the future. She attracts the people with her beauty and that will go off. Melisandre wears a huge ruby diamond necklace that seems to glow whenever she uses magical abilities. A similar necklace also hides her process of growing old. That’s how the Ruby has it’s magical features & updates to attract the people where as it’s also provides its power-packed features regardless of it’s ages.

Ruby on Rails shows some characteristic like John Snow as it encourages the people to eliminate the night king and his army of the dead. Like the same way, ROR encourages and facilitates the use of web standards like JSON and XML for data transfer & includes HTML, CSS and JavaScript for user interface.

Python resembles Daenerys Targaryen – surrounded by a great supersize reptiles and supportive advisors to achieve the Iron Throne and she can able to survive in the fire, which is one of the main things to NOTICE. since the day she started her mission, She is building her army constantly regardless of any struggle she faces,

Django implies Samwell Tarly – He’s not brave but has a weapon to eliminate night king, and also great at reading a lot of data which can help in coming winter war.

Flask is like Sansa Stark – she may be a slow learner but she never fails to learn, she will always do what she had to do to survive.

A popular lovable rogue among viewers who can complete the task by doing anything to make it work. Most of the time he does not look pretty or elegant.

Similarly, Laravel and Symphony are two brothers like Hound and Mountain respectively. They  might not come under love at first sight but slowly you will do! As it is easy to set up the initial configuration in laravel and can easily start the project whereas symphony takes a lot of time before starting of any project due to this, symphony framework is strong in the long run.

A War To End All Wars… But Doesn’t

Found it interesting? You too have a nice prediction on Programming language comparison or about the technologies which you think it might be added to this list. Come on! We love to hear from you! Get into the comment section below & let the world have a clear vision about technologies through GOT.

Latest posts by Rahul (see all)