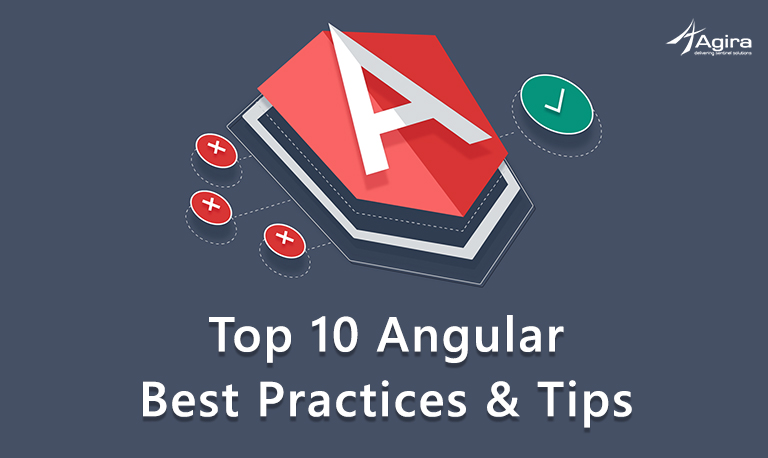 Being a full-stack developer, I always had a special love on Angular that would always push me to explore something new in it every day. I had like to put all those effective & interesting tips together which helped me a lot in my development and also received loads of positive responses from our team & from our clients for achieving 10X more quality in a short time. Keeping all these in mind, today I planned to share it with every Angular developer who is striving to learn & project them as a complete Angular developer.

So, If you’re facing any conflicts in Angular development and it’s performance then this guide will help you to achieve high performance, scalability, security on full swing adhering to the standards maintained by Angular.

While working on a medium-sized or large project, creating the folder structure is a very significant factor as it can bring loads of problems in the future in case if it’s structured in the wrong way.

Whenever we are working on a project, we may have to go through lots of changes. Thereby our project should easily adapt to the new changes. Creating a good folder structure will help us to manage and adapt things easily.

Let’s see the following folder structure for example and you can get the source code for it here.

This folder contains all of your styles file. Create subfolder like classes, functions, mixin( for SCSS).  You can structure it as per your chosen style standard. While writing styles, try to use SASS features instead of using plain CSS this will avoid code redundancy which results in reducing the code size.

Lazy loading is a design pattern in the programming language which is prebuilt in angular that used to load the things when it’s required. In Angular Lazy loading, only the feature module will load the component, pipes, decorators when it’s required also it will stop loading unnecessary components when it’s not required. This is the most important thing while working with the medium or large level angular project as it decreases the Page loading time.
You can more learn about this here (here).

TrackBy will uniquely identify each item in the collection by tracking the association between DOM and each item.
You can make use of the track by index when you do not have any unique identifier else you can set the identifier for the”track by” this will track the Particular id of the item. If you are using “track by” then it will avoid generating DOM elements every time for the element that are already rendered. It improves rendering performance and avoids changing the order of the items.

CDK Virtual scroll comes from Angular material package. “<cdk-virtual-scroll-viewport>” It’s used to show the largest list in the browser and also used to increase the performance of the Browser application. When you are trying to load more than hundreds of items at the same time, it will slow down the browser performance.  In that case, virtual scrolling will be used to increase the performance and view all the items being rendered. Before that, you have to set the height for the “<cdk-virtual-scroll-viewport>” then only it will render on the view.

Coding styles are very important things we should focus on in any programming language. The project should contain a clean code that should be simple, understandable and easily adaptable by another programmer.

I have stated the some important rules for the angular style guide which is good to follow by:

You can use the subscribed observables or promise in the view itself by using the async pipe. It represented by “async” name. Avoid the subscribing in component and binding that in view. If you have not set the “Complete observable” technique then it will lead to memory leaks and the async pipe will destroy the observable when the component is destroyed.

take(1) operator takes the first value and completes the emission. Thereby it will not subscribe when the new value observed. So we don’t have to worry about the memory leaks. Use this when you need to get the data only once.

Use takeUntil operator when you want to complete the observables when you want to listen to the observables till the component is going to be destroyed. See the following example. You can do as follow.
Create an observable Subject instance.
Use takeUntil operator pass the Subject instance in the pipe.
Add the ngUnsubscribe.next() and this.ngUnsubscribe.complete() in ngOnDestroy().
It will stop the emission when your component is destroyed.

You can also more about it here,

How To Prevent Memory Leaks In Angular Observables

8. Some Most Useful ES6 Features

There are some new ECMAScript standard features that will help the code look simple and better. Let us see the following.

Declare the variable with let and const instead of var. It will avoid “var” based problems. In case if the value doesn’t change then you can it declare with const else declare with let.

It is represented by three consecutive dots which is the most important feature in ES6. It is mostly used to cocat the collection in an array and also used to shallow clone the object and object property concatenation in an object.

Use some predefined methods like find, from, includes, of, reduce as these will avoid using the Of some unnecessary array utility libraries like lodash and underscore.js, etc.

Usually, we will get a syntax error when you are declaring the same variable name in two different switch case. In that case, you can avoid this using a block scop switch case.

State management is important for a medium and large level project to maintain the states. There are some frameworks available for angular like NGRX, NGXS, REDUX. You can use any of this to maintain a state but NGXS is suggested by most of them due to it’s easy to learn, removing boilerplates and it’s first-party plugins. There is a redux state management development tool is available for you in which you can analyze the Action and states in that tool itself.

When we are using concatMap with actions that should be neither aborted nor ignored and the order of the action will never be changed.

When we are using mergeMap with actions that should be neither aborted nor ignored but you can not expect the orders.

If you are using switchMap actions, it should be aborted when another action of the same type is dispatched;

When we are using exhaustMap with actions that should be ignored when an action of the same type is pending.

switchMap vs mergeMap vs concatMap vs exhaustMap

Also Read: Top 10 Angular Blogs You Must Not Miss

The following references will help you to understand and implement the best coding styles and practices.

A zealous full stack web developer with 3 years of professional experience. Hybrid application development and in developing Open-source projects are the best of my list. Out of passion ethical hacking is one of my hobbies. Yet, I am good at analyzing Web Security. And I teach machines with my expertise in Robotics and Machine learning.