What Is the Average Front-End Developer Salary in the US, the UK, and the EU?

Many companies across the world thrive to bring up a competitive advantage to their business through user interface and experience. The industry has faced more positive trends than ever before and expected. One of the major technology that is involved in designing the UI and UX is front-end development. Many front-end developers are getting a great opportunity in the market with a huge rise. Let’s take a look at the front end developer salaries in the US, the UK, and the EU.
In order to meet the expectations of the rapidly growing industry, a front-end developer should be ready to learn a new technology or tech stack once in two years. It is important to note that javascript developers are one of the largest developers communities as well as contributors in the world. Despite this fact, many tech companies are facing a talent shortage. This has further lead to an increase in the rise of the salaries of front-end developers across the world.
For this reason, many tech companies are outsourcing the front end developers from different countries.

Front-end Developers Salaries in the US

From the data taken from different reliable sources, the average salary of a front end developer in the US is around $119, 224 according to salary.com. The front-end programmers might get between $106,922 and a $130,083 salary range with respect to their skills, experience, and many other factors.
According to Indeed.com, the average base salary of a front-end developer in the US is $107,443 per year.
With respect to data given by Glassdoor, the average base pay for a frontend developer is $76,929/ year. The minimum salary is as low as $48,000/ year and the maximum is as high as $131,000/ year.

According to PayScale’s data, the average front end developer salary in the US is $69,411 per year and the median hourly rate is $24.42.

Top Paying Companies in the US

As per the details are given by indeed.com, the top 5 companies that pay the highest salary for frontend developers are given below.

Where do Front End Developers earn more in the US?

The highest paying states in the US are San Francisco, New York, and Alpharetta. The developers are getting paid around $144,000 in San Francisco, $127,000 in New York and $121,000 in Alpharetta. Here is the map that depicts the states the pay less or more than the national average salary of a frontend developer in the US. 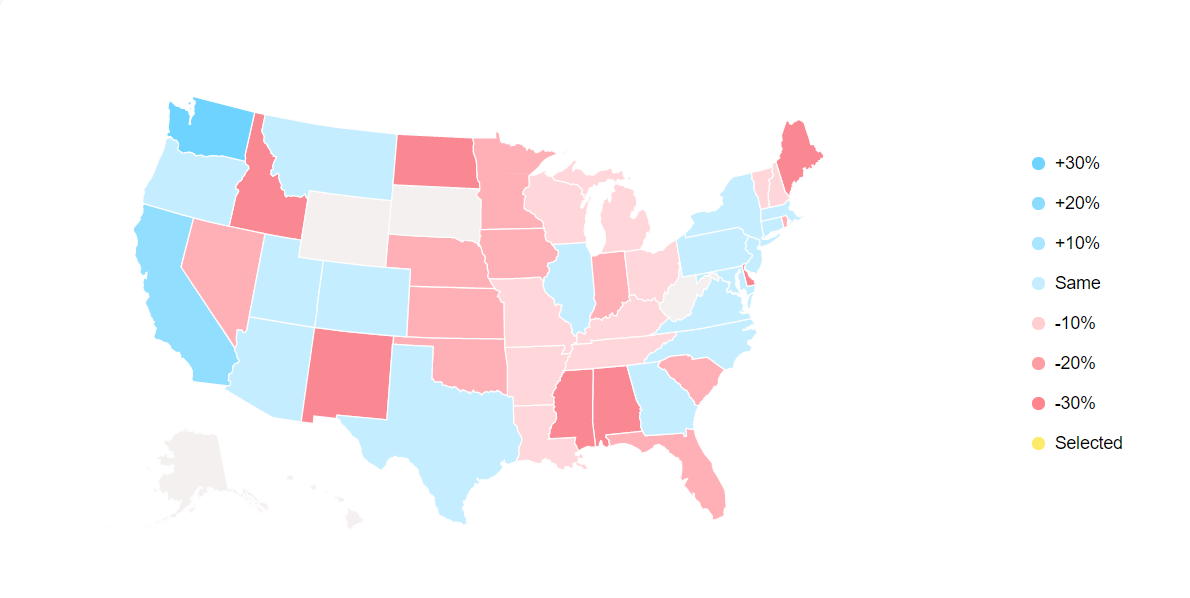 Front-end Developer Salaries in the UK

The report given by Glassdoor states that the average salary for a Front End Developer is £47,396 per year in the United Kingdom. The estimated salary of the front end developers in the states of the UK is taken from the data of the past 36 months.  The minimum salary for a frontend programmer is about £28,000 and the maximum salary is about £60,000.
According to CWjobs.co.uk, the average salary for Front End Web Developer jobs is £52,500. The front-end developers get paid from a basic of £37,500 to a salary as high as £52,500.

Highest Paying Location in the UK for Front-end Developers

Get to know how much front-end Web developers are paid across various UK locations and industries. Some of the top-paying cities in the UK are given below.

Top Paying Companies for Front-end Developers in the UK

The data given below is according to the report published by Glassdoor. 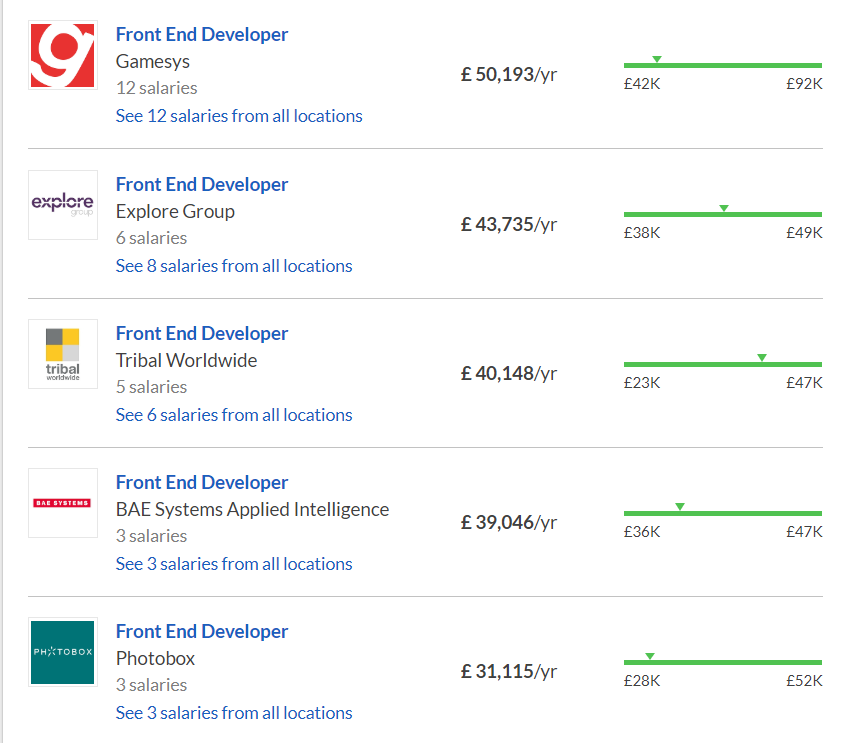 Front-end Developer Salaries in the EU

According to Glassdoor, the national average base salary of a Front End Developer in Germany is €52,540 per year. The salary might differ by location to a Front End Developer from one area to the other. It also states that the salary estimation for a front-end developer starts from a minimum of €42,000 to a maximum of €64,000.

ALSO READ: How To Build A Dating App Like Tinder

A report that was taken by an IT staffing company in Ukraine states the demand and interest for Angular developers that has raised in recent years. Here is the salary comparison of the Angular developers across the following locations. 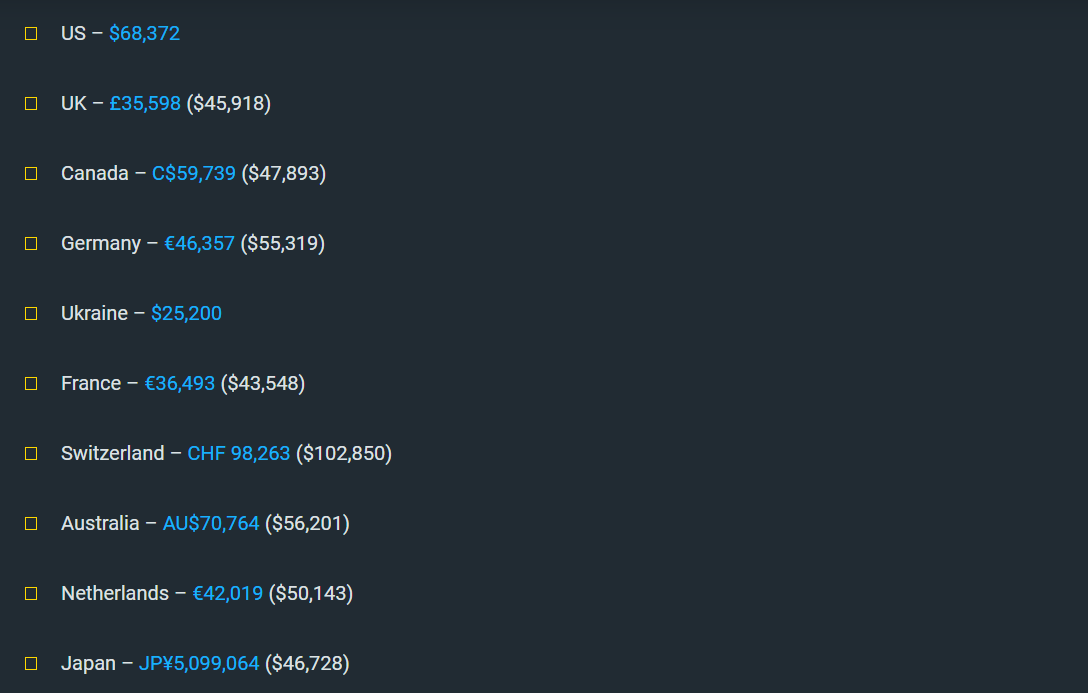 Some of the best skills that a front-end developer should learn to get an impressive rise are given below.

All the values mentioned in the above article are nearly approximations of the data received from many different reliable sources. So, you can assume that the above values are near to the real values with respect to the many other significant factors such as the candidate experience, talent scarcity, soft skills, and many others.
If you are a start-up company that cannot afford to hire a front-end developer at that high cost, we have got you covered. You can outsource from a skillful resource pool from Agira technologies to pick the best front-end developer for your business.
Do you find it interesting? you might also like these articles. Top 10 Best Tech Companies For Employees To Work In The USA In 2020 and Top 10 IT Staffing and Recruiting Agencies in the USA.
If you have a business idea in your mind and searching for a reliable web development company, you are in the right place. Hire the best web developers in the industry from Agira technologies.

5 Best JavaScript Certifications To Get In 2021

The Timeline Of 25 Successful Years Of JavaScript

How to Fix ‘A JavaScript Error Occurred in the Main Process’ Error in Discord?

Comparison of Top Javascript Frameworks in 2020

How To Create Image Classifier Using Javascript in 10 Minutes