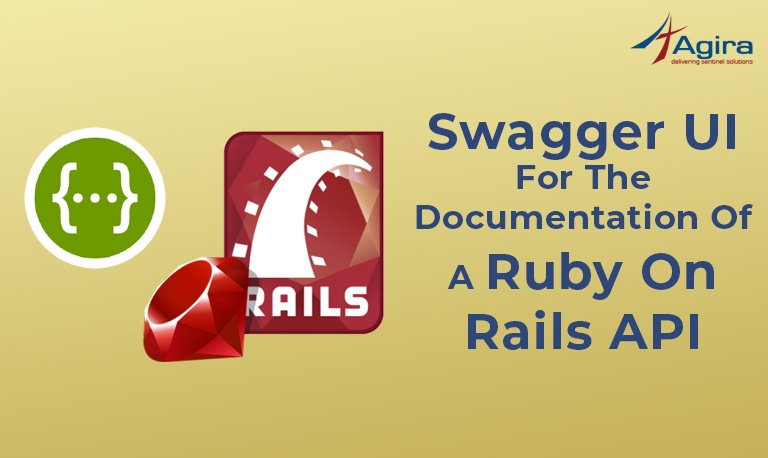 Swagger UI for the documentation of a Ruby On Rails API

In this blog post we are going to demonstrate the usage of  Swagger UI for Ruby on Rails , which is one of the best combinations for API documentation.

Ruby, with its reliable open source framework Rails, is an excellent option for building API’s. Especially, it is highly recommended for starting larger API projects. And with the Rails 5, it is mostly a breeze.

Rails 5 has some cool features, like generating and scaffolding an API without the hassles of the browser and html, with its integrated Rails-API gem. This also leads to a faster API-only application plus an easier rendering of data to json or XML.

Well, once the Rails API has been developed, the next is to document it. Enter Swagger UI… which documents an API both in machine and human readable form. While there are several products for documentation, we will stick on to Swagger with this post. It is truly more popular than many other frameworks for APIs, it has great support resources and is relatively easier. The Swagger UI is used to create client libraries to an API. This is done by building an API (in our case, with Rails), documenting the resource controllers of the API, and then generating a json Swagger Definition for the same. This will then be plugged into the Swagger UI which will create awesome documentation for the API. That’s it, to put it in a nutshell. And oh, of course, this is all done with the help of the Swagger-docs gem.

If that is too vague, let us break it down into steps with a generic example.

First and foremost, we need the swagger-docs gem installed. For this, we will use a sample application, and in the GemFile of the application, we include as follows:

Save the file and run ‘bundle’ or we can install it by:

Now, we have the swagger-docs gem installed in our system.

This is the minimal configuration settings. Following is the table that lists the entire configuration attributes and their default values:

The following table shows all the current configuration options and their defaults. The default will be used if you don’t supply your own value.

Following is the table that describes the methods of the DSL of swagger_api block:Similarly, we document all controllers and methods. Suppose there is a common
header or parameter that is to be used across controllers and methods, we could use set them in the API BaseController and have them inherited. This makes the base controller as a superclass to all other controllers and the subclasses will be documented accordingly. In fact, there are two ways to do this… one as stated above, and the other way is to use a block for the swagger_api definition using self.add_common_params(api). But we shall talk about this in another post. For now, we will stick with the procedure mentioned so far.

from the Rails root directory. Yes, it is simple. This command goes through all controllers and determines those that have to be documented. Since we have already created the configuration of all the API methods, the Swagger UI json files would be generated and available in your api_file_path (e.g. ./public/api/v1). This is the path that we have set in the config/initializers/swagger_docs.rb file.

But what if a generation fails?

Errors will not be displayed by default. We will need to add an additional attribute to the rake task in order to view all error messages generated during the execution. Therefore, we will run the rake command as follows:

Yes, by adding the environment variable SD_LOG_LEVEL, we will be able to log the errors but currently, only constantize errors are shown. These are written into $stderr, and the error logging methods which are listed in the config can be overridden for custom behaviour.

A sample JSON Output file will be as such:

Finally, we shall integrate the Swagger UI index view with the Rails application public directory. This is a good practice for better readability of the project. To do this is another simple procedure.

Finally, we are ready to view the Swagger UI documentation for the sample Rails application. Restart the Rails server if it is running, and then go to the index file of the application in the browser.

Also, in this post, we are dealing with v.1.2 swagger specifications. With the v2.0, we will use Swagger-Blocks.

Check out the links in this post for chain information and procedures. Happy coding and documentation, guys. For more on Ruby on Rails follow Agira Technologies.