Reasons Why You Should Learn Ruby On Rails | Best ROR Company 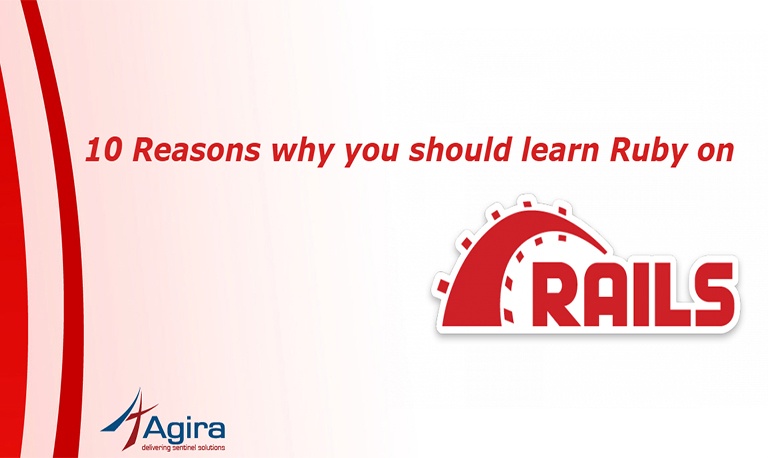 10 Reasons Why You Should Learn Ruby on Rails

Here in this blog, we are going to explain the reason why you should learn Ruby on Rails in my opinion and which make ROR a beneficial enough to be a serious pick for a new budding programmer to learn. The first thing that comes to your mind when you hear about Ruby on Rails is “What is Ruby on Rails?, So before we start stating the reason let me give you a small introduction to Ruby on Rails.

What is Ruby On Rails(ROR)?

Ruby On Rails is a Server-side web application framework written in Ruby. It is a high-level programming language. ROR is Object-oriented and Interpreted. It is written by David Heinemeier Hansson.And, it is an MVC framework

MVC is a software design pattern used for developing a web application. It organizes the application programming logic into three layers.

In addition to MVC, Ruby on Rails also prioritizes the use of other patterns and paradigms like DRY, CoC, etc.

Why You Should Learn Ruby On Rails:

Learning Ruby On Rails will help you to develop both frontend and backend of the application. Whereas you cannot do it using languages like HTML, Python, Javascript, SQL, etc.

Since it is based on Ruby, it is easy to learn and use. The code in Ruby is also easy to read and understand. It is also properly documented. Also missing simple things like missing a semicolon, having white spaces doesn’t cost you time since all these things are not considered by Ruby. We all know what can happen over missing a simple semicolon in Java.

There is a large, enthusiastic community for Ruby On Rails. They contribute their code to Rails making it easy for other members. Even You can become one of them once you get proficient with ROR.

Active Record framework work by saving objects into the database. It is the M-Model in MVC pattern. This Active Record facilitates the creation and use of objects whose data is to be stored in a database.

Convention Over Configuration in ROR:

CoC is a software design paradigm. It is also known as coding by Convention. Without the need of many configurations, the program is developed using native procedures and functions of the language.

When you are creating the models and controllers rails create test code automatically. You can extend the test code when needed. It also provides supporting code making it easier to write and run test cases.

Need not start from scratch:

You don’t need to code from scratch, ROR relies more on metaprogramming technique to write code. Metaprogramming is a technique in which the computer programs can treat programs as their data. We can use one program to read, generate and transform other programs. This, can, in turn, reduce the number of lines of code needed to express a solution.

Now, do you have any reason left for not learning Ruby On Rails? If you really don’t want to learn it but in need of building a robust web application quickly. Then, Hire a ROR developer. It’s that simple.

You can also keep yourselves updated with the latest improvements in Ruby on Rails and learn several tips and tactics from the fellow developers by joining some of the popular Linkedin Ruby on Rails groups.