Why is Python the most popular language for data science? | Python Web Development 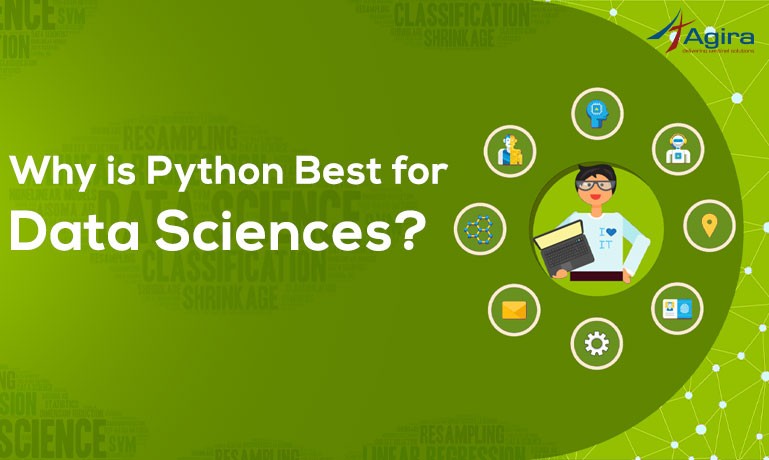 Why is Python Best for Data Sciences ?

Python for data sciences is well known as an on-demand course nowadays due to it’s increased use and effectiveness. As you can see the growing trend of Python in google trends, in 2019, Python software development has got heightened traction surpassing java. The ramp-up is especially due to the use of Python in Data Sciences, Machine Learning, and Artificial Intelligence. A report from the economic time states firmly that the use of Python for data sciences contributes to the 25% increase in the popularity of Python in recent days. Now you get the reason behind the sudden growth trend of Python. Thus, let’s discuss why Python is the best fit for Data Sciences.

What is Data Science?

Data science deals with converting huge amounts of data (Big data) into meaningful information. Many different industries make use of data science to study the trends of different data that are consumed all over the world. Especially in the marketing field, Big data plays a crucial role in predicting trends with the user data. The major industries that use data sciences are finance, e-commerce, and health care. Across businesses, it works for applications such as image & speech recognition, digital ads, recommendation & comparison sites, gaming, and risk detection.

Why is Python Best For Data Science?

Besides these tools, most data analysts consider Python as the best fit for data sciences. This is because Python is reliable and it caters to all the requirements that data sciences demand. There are many reasons to consider Python. Because it is an open-source programming language. Consequently, Google’s internal structure and applications like Youtube are built with Python. In addition to that, Python supports object-oriented, structured and functional programming. This means that Python can be used for anything.  Above all, Python’s unique attribute is the main reason that enhances its use in quantitative and analytical computing.

Python is perfectly equipped with all the toolsets that one needs for dealing with any kind of complexity in data science. One of the main resources that contribute so much to data science is Python libraries.

There are hundreds and hundreds of Python libraries available online to make anything possible with Python web development. When it comes to data science, there are many open-source libraries such as Pandas, SciPy, NumPy, and many others. Here is the list of top five Python libraries for Data Science.

It is the most popular data analysis library that helps you with all the basic operation and maintenance of structured data. Although Pandas is an open-source library, its high-performance applications make data analysis extremely easy. Basically, Panda helps us with munging and preparing data.

It is the abbreviation of Scientific Python which can deal with functionalities related to mathematics, science, and engineering. So, you can perform anything related to Linear Algebra, Fourier Transform, and contains modules for optimization.

Similar to the previous one, this is the abbreviation for Numerical Python. This library deals with features numerical functionalities and features such as linear algebra, Fourier transforms and advanced random number capabilities. One of the main features of NumPy is its n-dimensional array.

The most important thing when it comes to data science is data visualization. All the calculation that is done by the program should be visualized in such a way anyone can understand. Python can do this with its Matplotlib library. This library will let you plot graphs in many different types. From pie charts, bar graphs, histograms to heat plots, Matplotlib is the ultimate plotting library for the Python programming. you can also embed these plots into applications using GUI toolkits. Another library called Seaborn is also considered great for statistical data visualization with attractive graphics.

Sklearn is an excellent open-source library for machine learning with commercially usable – BSD license. Scikit-learn will let you perform various functionalities such as classification, regression, and clustering algorithms. This library also allows integrations with Python’s other libraries such as SciPy and NumPy.

There are many other Python libraries such as Scrapy, Statsmodels, Plotly, Bokeh, and Pydot. Therefore, most of these libraries are free of cost and has a strong and active community to support.

Data Analytics is Easy with Python

You can resolve anything complex in data science by just mastering the following functions in Python.

With these functions, you can do anything with the help of these. Python Data Structures, its Integrations, and Conditional Constructs also play a crucial role in Python web development for data science.