The 9 Most In-Demand Development Languages of 2017 | Programming 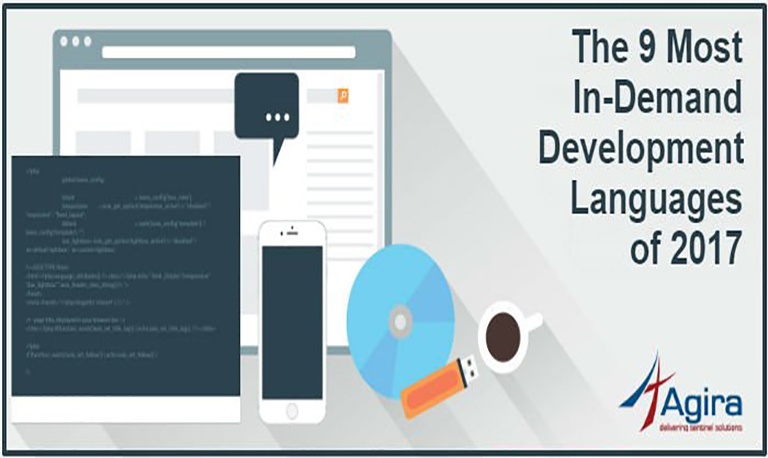 The 9 Most In-Demand Development Languages of 2017

We all live in a constantly evolving world. New technologies are emerging every day in a rapid manner. Hence, it is essential for every developer, founders, CTO, technology lovers to keep up with these evolving technologies and to know about the in-demand development languages.

How does a programmer select the most appropriate programming language for development? The answer depends on a lot of diverse factors. For learning a new development language, it’s better if we look at the current trends. This gives us an indication about how much a language can grow in its usage and importance. It is also essential that the developer understands the customer’s requirements so that he can analyze how he can provide the customer’s requirements in a satisfactory manner in different languages.

Nowadays, skilled programmers are in a massive demand. Despite large employment opportunities available to programmers, it is essential they stay ahead of the competition. To ensure they do so, these programmers try to master multiple development languages. But which are those development languages that are most in-demand and that a programmer could learn? Here, we give you a detailed analysis of the most preferred languages in 2016, which will continue to remain in demand among the developers in 2017 too.

JavaScript, often referred to as the ‘language of the web’, is the most widespread webpage designing language. This is a high-level, extremely dynamic, run-time programming language. Alongside HTML and CSS, JS is one of the three core technologies in WWW content development and designing and it’s supported by all contemporary web browsers. It’s basically a frontend web development language which facilitates the development of web applications. It allows the developers to add interactive elements to their websites. JS derives most of its syntax from C language.

Java is a general-purpose, class-based, object-oriented computer programming (OOPs) language. It is used for developing server-side applications, android apps, games and website content. Being the core application for Android development, it is extremely popular amongst the developers. Java derives most of its syntax from C and C++ but it has lower functionalities than both of them. Amazon, LinkedIn and eBay are websites that use Java.

Python is a universally popular OOPs language that closely resembles English. The Python framework provides the solutions to a wide range of tasks.  Due to its easy syntax, it’s generally suggested as the first programming language for an upcoming developer to learn. Instagram, YouTube, Reddit, NASA and Usersnap are websites that use Python.

Ruby is a general-purpose programming language that implements OOPs concepts. It also supports multiprogramming paradigms. Ruby is also relatively easy to learn and use, leading to a high demand for it these days.  It also has a dynamic type system and it also supports automatic memory management. It is one of the most preferred languages for many startups.

*Ruby on Rails is a server-side web application framework written in Ruby.

PHP (Hypertext Pre-Processor) is the most popular and widely used server-side scripting language for web development.  It has a more significant edge over its rivals as it is open source and relatively stable. It’s commonly used as the foundation of Content Management websites like Facebook, Wikipedia, and WordPress.

C# (C Sharp) is a general-purpose, modern language. It implements the object-oriented programming concepts and was designed by Microsoft. This is a relatively new language which provides functionalities to a wide-range of Microsoft applications that are powered by .NET Framework. However, it is not limited just to .NET Framework. It’s also used for Android/ iOS applications development with the technology for Windows products.

Go (Golang) is a modern, open source programming language that strives to make efficient and reliable software. It was designed by three Google employees in the year 2007. It has an excellent standard library which allows it to compile extremely fast. It’s also extremely receptive to multi-tasking i.e. it’s great with concurrent tasks and multi-programming. Keeping in mind its simplicity, many startups have also made it the most preferred language of their choice. Netflix, YouTube and Adobe are the websites that use Golang.

Scala is a general-purpose programming language that incorporates both functional programming and OOPs concepts. Designed to be concise, most of Scala’s design decisions were aimed at addressing the shortcomings of Java. This programming language can handle massive chunks of data with its efficient libraries. Scala is a lot easier to use and is much more productive than Java, as it focuses largely on interactive development. Its demand is expected to grow in the coming years and is expected to be among the top language in a few years.

Swift as its name suggests, is one of the fastest growing development languages in history. This programming language was developed in 2014 by Apple, for its iOS and MacOS and other OS application development. Ever since its birth, it has been in tremendous demand and developers are learning this language in large numbers. This language is a must-learn if you aspire to become an iOS App developer. It has picked up the better sides of C and Objective-C, which allows a developer to create an intuitive app.

We at Agira Technologies are having expert developers in all the mentioned open source frameworks. We could help you develop web and mobile application products with this intuitive technology platforms. Please feel free to contact us.

Share your comments about this blogs too. Looking forward to hear from you about your views on the top development languages.