How To Interact With Database Using Async Module In Node.js 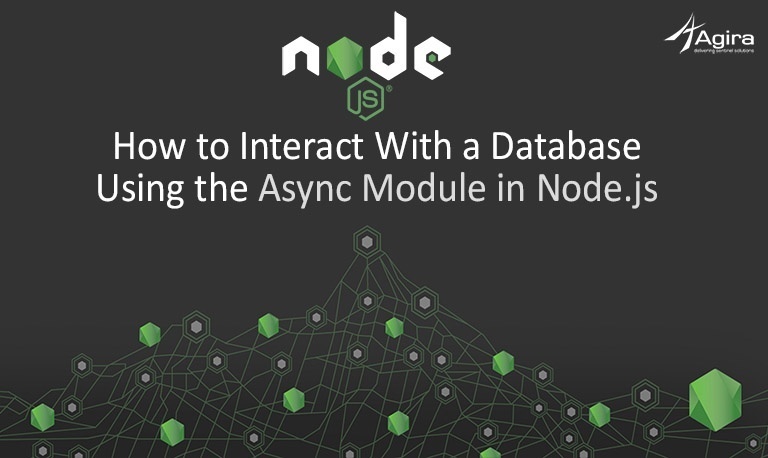 How To Interact With Database Using Async Module In Node.js

As we all know NodeJs works asynchronously (i.e., Non-Blocking). It will not execute the programming code line by line and it will not wait for any function, i/O or DB operations to finish executing. This feature of nodejs makes the process more efficient, but we cannot prefer this asynchronous nature in all scenarios. For example, In case of Database interaction we must need Synchronous method to execute the code line by line.

Table of Contents hide
1 Plus, There are 3 ways to handle the asynchronous nature of the nodejs.
2 Async:
3 async.waterfall Method
4 Why async.waterfall method is used:
5 async.series:
6 async.each
7 Result:
8 async.map:

Plus, There are 3 ways to handle the asynchronous nature of the nodejs.

since callbacks and promises are beyond the scope of this blog, now we will see how to handle database interactions using the async module.

Async is a utility module which provides straight-forward, powerful functions, that helps us out with the asynchronous tasks that are so often found in Node.js, and in the browser too. Async provides around 70 functions that includes the usual ‘functional’ suspects (map, filter, each…) as well as some common patterns for asynchronous control flow (parallel, series, waterfall…) all designed around asynchronous functions and callbacks, to make our life easier. Some of the important methods are discussed here. We can avail the Async via npm.

Below are the steps for a sample node API that uses the async module ’s method to interact with the database. To make this application work, Make sure the Mongo database installed in your system. To illustrate this example, consider we are going to upload a post with two fields named as ‘title’, ‘content’ into Mongo database, and also edit, retrieve the same. For this, create a database in mongo db with the name of your choice. For this example, I created database name as “blog_posts.”

Create a folder named “sample.” Locate the folder in the terminal and give “npm init”. Now, this will prompt you many questions and continuously  press enter for all the questions so  at the end it would create package.json in the folder.

Paste the below code into the package.json and save it. In the terminal run “npm install.” This will install the packages defined in the dependencies section of package.json to the project.

If you have the records in Database you can able to fetch and update it using this Waterfall method. For example, We already have record named “electron” in database so we tried to fetch and update with below code.
Now, create a file api.js and paste the following code there.

When you have a group of functions that depend on each other (i.e., when a function expects a previous function output as input to it) and wanted to execute in order (one after the other), then async.waterfall should be used. Here each function passes its result as input to the next function through callback. If any of the asynchronous function passes an error to its callback, the final callback is immediately called with error.

Create a file named ‘server.js’ and paste the following code there. This will create a server and make it listen to the port specified here in the file (3001)

Now if you save all the files and run “npm start” from the terminal, you can see server listening to the port 3001.

Why async.waterfall method is used:

To illustrate database interaction using async.series, consider we are going to upload a post with two fields title and content and retrieve the same post by its “Title” field. For this we have three independent functions, ConnectToDb() which will connect to MongoDB, addPost() which will add title and content of the post to the database and other function getPost() which will retrieve the uploaded post by its title field. The three function will execute in the order they are written and send their results back to the final callback function through the callback.

When we want a some function to apply for all items in an array and do something once the function finish executing for all elements in the array, then async.each should be used. If the function passes an error, then maincallback is called with error. async.each runs in parallel, but if you want to run it in series, you can use async.eachSeries instead of async.each.

In the above code, after establishing a connection to the database, We have an array of items that we want to save to our database. Once they’re all saved, we execute a function that calculates the total no of posts in the database.

async.map runs a function on each element in the array resulting in a new array with the updated items. Once the function finishes executing for all the items in the array, the result array will be passed to the final callback. If iterator function passes an error to its callback, the final callback is immediately called with the error. The async.map applies the function to each item in parallel, and there is no guarantee that the functions will complete in order. However, the results array will be in the same order as the original array.

In the above code, after establishing a connection to the database, we are retrieving a list of post by its title. For this, we have an array with the list of post titles. The aync.map function will loop through title array, apply our function getFromDb() to each title in the array and store the retrieved values in the array to be returned in the order we expect, to the main callback.

Note:
The async.map is almost same as async.each but the only difference is that async.map will pass the results array back to the final callback where async.each will not pass.

Hope you find it helpful and similarly you could explore more about technologies with us. Our pool of experts evolving technologies up-to-date so stay updated with us for more technical updates and blogs. On the go, Don’t forget to post your interest and impressions in the comment section.

Junior Software Engineer discovered her passion in Software engineering and getting specialized in developing Node.Js & Angular applications. Chill out! Coz, this super cool girl hate to be serious as she always thrives to live her life like a gambling game.