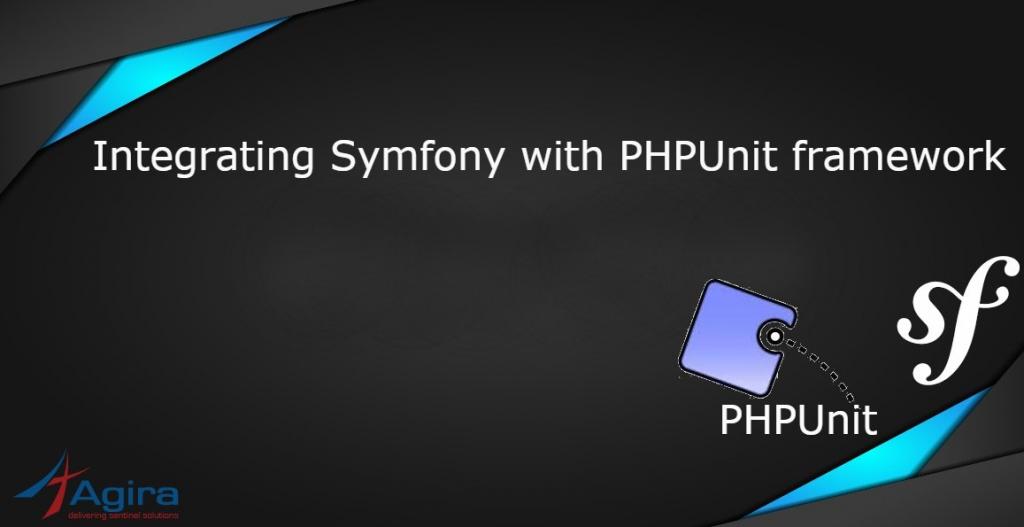 In this article, we shall find the steps to integrate Symfony with an independent library called “PHPUnit” for testing purpose and func. Since we are working on PHP development, let’s discuss the framework called Symfony, PHPUnit.

Before we are going to the integration extensively, let’s see what and why we actually need “Software Testing”.

What is Software Testing:

Software testing is the process of executing the program especially to find the bugs.

Testing makes a product more reliable and efficient. There is a need to deliver a product without any bugs which will give a great assurance about quality.

Simply we can say that testing help in validating and verifying the product. We have so many types of testing. But unit testing is the base for all the other testing types. It will be done by developers after completing the coding part of the small unit.

But it’s somewhat difficult to write testing manually and running through each of them. We would have definitely missed some scenarios and test cases which lead to getting a bad impression from the client. Most of the manual testers would have gone through the problem at least once. Humans can make mistakes. But tools can never be. This is the main reason for migrating from manual testing into automation testing.  It will become enjoyable to write tests if we have tools to automate the processes. This is why we are getting the framework called “phpunit” as a unit testing framework for the PHP language.

We can install PHPUnit two ways. The easiest way of obtaining PHPUnit by downloading PHAR that has all bundles into a single file.

After injecting the above code into “composer.json”, composer needs to be updated for getting PHPUnit execution.

The composer can update with the following command:

There we go! Now, PHPUnit has installed and executable for tests with the related path of the file. For example, if the test file called “SampleTest.php” with the path of that file to run the test.

Till now, we have understood about why we are doing testing and the installation of unit testing with PHPUnit. Before starting any new project, there is a key decision is to pick the right framework. Many popular languages have their own default framework.  But for PHP there is no single default framework.

Since we are around the development of PHP must know the frameworks such as Symfony, Laravel. Symfony is an open source PHP web development framework that is popular among most developers as it develops a high-end complex web application with minimal cost.

Symfony integrates with PHPUnit (an independent library) to give you a rich testing framework. It can be configured by phpunit.xml.dist file in the root of your application.

There are two types of testing.

Unit test allows testing individual components/class, such as a method in a class called “units”.

Writing Symfony unit tests is not much different than writing PHPUnit unit tests. For example, if you have class in Util/ directory with Calculator:

For example, if you have class in Util/ directory with Calculator:

Then the test script should be create as CalculatorTest in tests/AppBundle/Util directory:

You can run using below commands:

# run all tests of the application

# run all tests in the Util directory

# run tests for the Calculator class

# run all tests in the Util directory

PHPUnit 6.1.0 by Sebastian Bergmann and contributors.

The functional test allows testing some of the functionalities to find out the errors before deploying them. This will test many methods and may interact with dependencies like Databases or Web Services. Each test a PHP class that should live in the “tests/” directory of your application.

There is no big difference then unit testing but functional testing have some unique workflow:

Let’s see how function testing works with an example. We are going to explain how to do a functional testing with Symfony’s crawler.

After creating a Symfony project named ‘crawling’, create a bundle called “FTestingBundle” which holds the application and test code. Now, we have sufficient components such as Symfony with FTestingBundle, PHPUnit to do functional testing.

Change into the directory of the ‘crawling’ project and run the following command to test all the tests inside of the application:

When we generate a bundle, a small block of sample test code also gets generated.

So the output will be:

This command shows that app is properly installed and tested.

Let’s start with the new controller and controller action. Create a new file named “CrawlingController.php” under src/Crawling/FtestingBundle/Controller and insert the following code into it with the proper namespace and also include the necessary parent class.

We have created a method called homeAction() to render a template called ‘home.html.twig’. Create a template file with the following HTML tags inside.

WebTestCase class gives us a PHPUnit functionality. The test method has created to test home page. Always have prefix our method name with the word test when created test methods.

The Crawler in Symfony allows us to collect the information about the pages of web application and also perform actions like clicking links or submitting forms too. For that purpose, we have defined crawler object by making an HTTP request with the client.  This let us know about our page exists along with the proper HTML and formatting and the controller, template, and route all work as a single unit. The crawler object will contain page’s response. We will test this response to ensure everything is working properly as expected.

We are on the correct track if the content matches. Let’s see what happens with the following command:

The above small examples might be useful for beginners who need to get knowledge on Symfony integration with PHPUnit.  We can test a small application through PHPUnit in an efficient way to deliver a product with good quality.

Want to know more about Symfony? Our Symfony experts at agira technologies can help you.

One thought on “Integrating Symfony with PHPUnit framework”