How Bitcoin Is Changing The World? | Impacts of Bitcoin 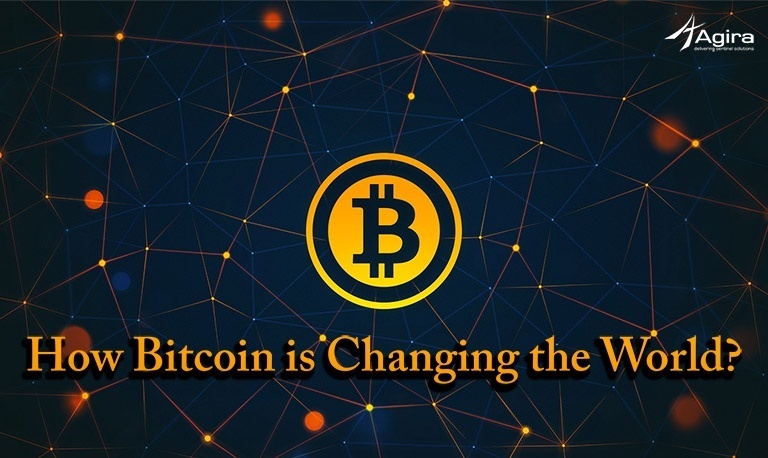 How Bitcoin Is Changing The World?

There is a famous quote which states “Change is inevitable.” This proverb is applicable to almost everything in the world, and “Technology” completely owns this quote. Nowadays, it is quite tough to think of using anything without the intervention of Technology. For example, if I want to pay a telephone bill, am not able to think of multiple options other than paying through the website or through mobile apps which is ultimately a byproduct of technology. Sometime back, as I was looking into the latest technologies which will be driving the coming years, I was surprised to see ‘Bitcoin’ having its place on that list.

Table of Contents hide
I I have heard a lot about ‘Bitcoin’ in news articles, but I was unreceptive to know more about it as I thought it would be a scam. Knowing that it was one of the latest technologies to be looked upon, I have decided to feed some new data to my brain!
II What is Bitcoin?
III What is Blockchain Technology?
IV What is ICO?

I have heard a lot about ‘Bitcoin’ in news articles, but I was unreceptive to know more about it as I thought it would be a scam. Knowing that it was one of the latest technologies to be looked upon, I have decided to feed some new data to my brain!

There could be multiple definitions for Bitcoin. But in general, Bitcoin is nothing but one of the cryptocurrencies similar to Airtel money or Paytm wallet with different underlying technology. What makes it so special is its current market value it holds. I.e., 1 Bitcoin = 11,275 USD which is approximately INR 7.3 lakhs (as of March 6, 2018).

A digital currency which holds value higher than to that of US Dollar is definitely a hotcake. How it earns this position is something to be mined next.

The birth of bitcoin was dated back to Aug 2008, when Satoshi Nakamoto initially developed it. Unlike the existing digital transactions which are centralized, bitcoin was built on blockchain technology – meaning the transaction is decentralized in nature.

In the year 2009, the first transaction has happened with bitcoin (BTC) as a digital currency. Here the surprising fact is that the valuation of BTC at that time was, 1 USD = 1,309.03 BTC. Within 10 years its value has grown tremendously, and the main reason is the underlying technology (i.e.) “Blockchain Technology.”

What is Blockchain Technology?

Every computer that is involved in this type of transaction acts as a ‘Node.’ The transaction initiated on a node is moved to the blockchain as an individual block using ‘Smart Contract’ – a piece of computer code which is similar to a stored procedure in the centralized database.

Blockchain technology was initially used for digital transactions, but now it is being used in many industries like gaming, infrastructure, and supply chain management to name a few.

As the bitcoin wave shook the world, there are several cryptocurrencies like Ethereum (ETH), Ripple (XRP), Litecoin (LTC), etc. that were built upon this blockchain technology to make use of the opportunity. As of January 2018, there are over 1384 cryptocurrencies, and the list keeps on increasing. This technology also gives birth to a new term called “ICO” (Initial Coin Offering).

Though there are challenges in this market in the form of regulatory issues, the high failure rate of the crypto projects, etc., the pace at which the market is growing clearly indicates that the future of transactions will be on cryptocurrencies and the initial seeding for it was Bitcoin.