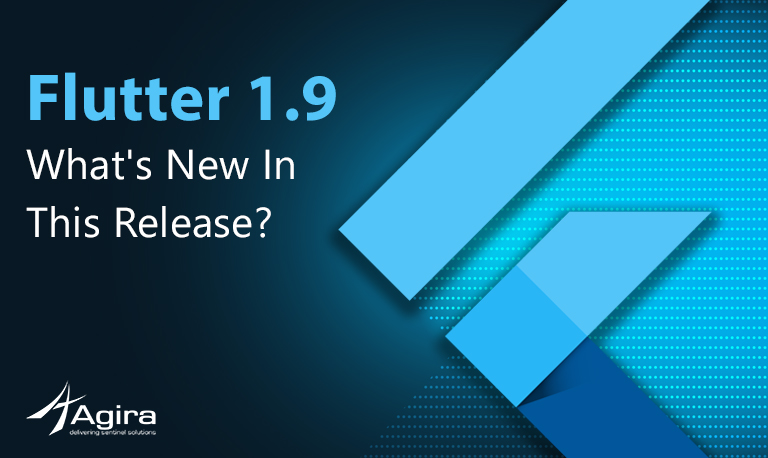 Flutter 1.9: What’s New In This Release?

During the Global Developers Day in China, Flutter 1.9.1 was released in a keynote on September 10, 2019. Flutter is Google’s open source framework for mobile development written in Dart programming Language. Flutter is being used in the fast-growing mobile applications.

This stable release marks a significant milestone for the framework. The latest features support MacOS Catalina, X code 11 and iOS 13 with Material widgets, new commands for Android and bug/issue fixes to prevent crashing. According to Chris Sells, PM for the Flutter developer experience, “the biggest update yet with more than 1,500 PRs from more than 100 contributors”.

Another spotlight of the Chinese conference is the integration of the web Flutter support with the repository allows developers to write in mobile, web devices, desktop using the same code base.

Let’s take a closer look at the improvements and latest features.

As Apple prepares to release Catalina and iOS 13, Flutter is all set for the upgrade. This version comes with end to end tooling experience on Catalina with XCode 11. It includes a new XCode build system support, enables 64-bit support throughout the toolchain and simplifies platform dependencies.

Flutter 1.9 also supports iOS 13, which is yet to release. It features a draggable toolbar and supports vibration feedback. iOS 13 dark mode support is underway. Now you can turn on experimental support for Bitcode, which is Apple’s platform-independent intermediate representation of a compiled program.

Submitting your app as Bitcode allows you to optimize your binary without resubmission in the future. Flutter also supports watchOS and tvOS that require Bitcode for app submission.

Flutter 1.9 gets a new widget for material including ToggleButtons and ColorFiltered.

The ColorFiltered widget will be helpful with color blindness accessibility issues. The ToggleButtons is viewed as an inspiration for future app design. Another new update is SelectableText widget allows the users to select the read-only text.

Upgrades for the Tool Chain

The new projects default to Swift, instead of Objective-C and Kotlin instead of Java for iOS and android projects. By making Swift as a default language, removes manual work of adding the packages to an app created with default options.

As for the Android Studio uses Kotlin as the default language for the new projects. There is a natural language switch for android also. These options are now default, flutter CLI tools and the IntelliJ/Android Studio, VS Code plugins for Flutter.

This version also deprecates the flutter web repository and merges into the main flutter repository.

“What this means is that if you have the latest builds of Flutter from the master or dev channel, you can target the web with the latest experimental version of Flutter, by running flutterrun-d chrome.

When you create a project, Flutter now creates a web runner via a minimal web/index.html file that bootstraps your web-compiled Flutter code. With that file in place, you can use the Flutter CLI tool or the IDE plugins to edit and run Flutter apps on the web.”

Now all the users can experiment with the capabilities of the web support. The communities’ experiments have already showcased Fluter’s web output. Check out the Flutter Widget Livebook and Panache.

It provides worldwide language support for 24 new languages, from Afrikaans to Zulu.

As a part of Flutter 1.9 release, Dart 2.5 was also released. Dart 2.5 includes improved support for constant expressions, a pre-release of dart:ffi Foreign Function Interface (FFT) support, which allows users to call directly into code written in C. It also features a machine learning-powered code completion for the IDE. You can learn more about this in the Dart 2.5 announcement.

What Makes Flutter As Ideal For Cross-Platform Development

Agira provides excellent Mobile and Web Development Services. You can hire our creative mobile app Developers for your projects. If you like reading this blog. Subscribe to our newsletter and enjoy the latest updates in your inbox.