As a part of Agira’s fourth successful anniversary celebrations, we planned for a team outing to commemorate our fiesta unforgettably delightful. Getting started with the right place to celebrate, we conducted a poll and chose an exotic adventure camping site in Ramanagara near Bangalore.

The Q Mango Forest resort is about less than 50 km from Bangalore, surrounded by rocky hills and a scenic lake. Being popularly known as Sholay’s shooting spot, it is perfect for indulging in adventurous activities. 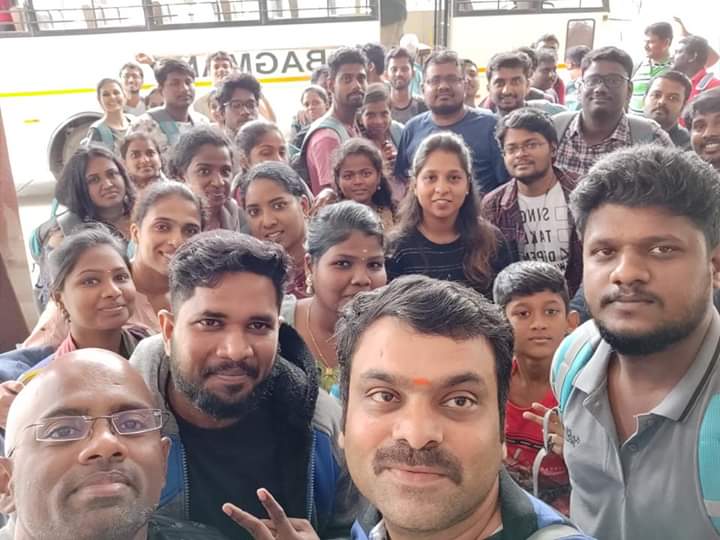 We started on 6th December on a Friday evening from Chennai Central to Bangalore. On reaching the resort by next day morning, all of our 60+ employees freshened up from our allotted tents and got ready to unpack all the fun awaiting. The warm brewed coffee from their restaurant and the spectacular lake view along the sides of rocky mountains was enough to soothe the constant bustle of a city life. After feeding on the breakfast, we explored all the adventurous activities starting from ziplining. 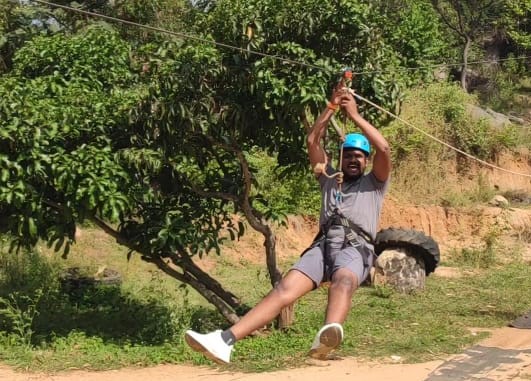 Ziplining was an excellent experience where they attach you to a zipline cable from an elevated point. It was not very high, but huge enough for an adrenaline rush. Climbing high from the zipline area, we could see people rappelling. It was exhilarating to climb the rappelling area and nearly skipped a beat when climbing down the hill.
On completing all the climbing activities, the lake water was calling loud. Some stepped into the lake, and others who didn’t want to get wet came for kayaking (we splashed water and drenched them too..!) 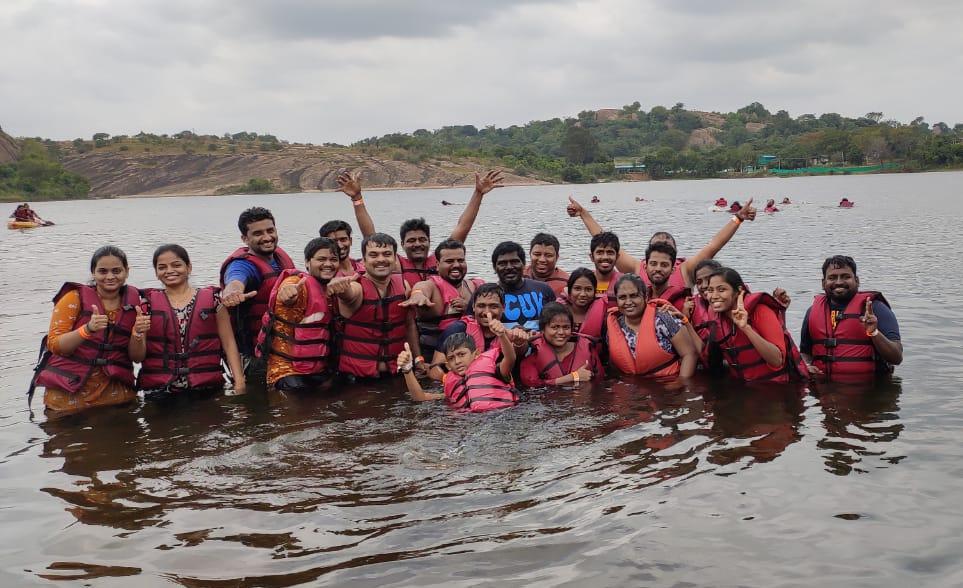 Some got muddy playing mud kabbadi and human foosball. Sunsets when they got tired of playing and enjoying. The cultural crew was ready to entertain throughout the dusk. Commencing the program with awards, Reddy Sai got recognized as the best performer and GIS team as the best team of the year. Karthiga took an extra mile award, and Murali was the star of the year. As expected, Mani got the best blogger award, and the team acknowledged Selva as the path maker of the year. Agira’s founders Ganapathi and Mariappan praised everyone from the project InterMX, for its successful running. And all the others who were working with Agira for 2 – 3 years were appreciated. 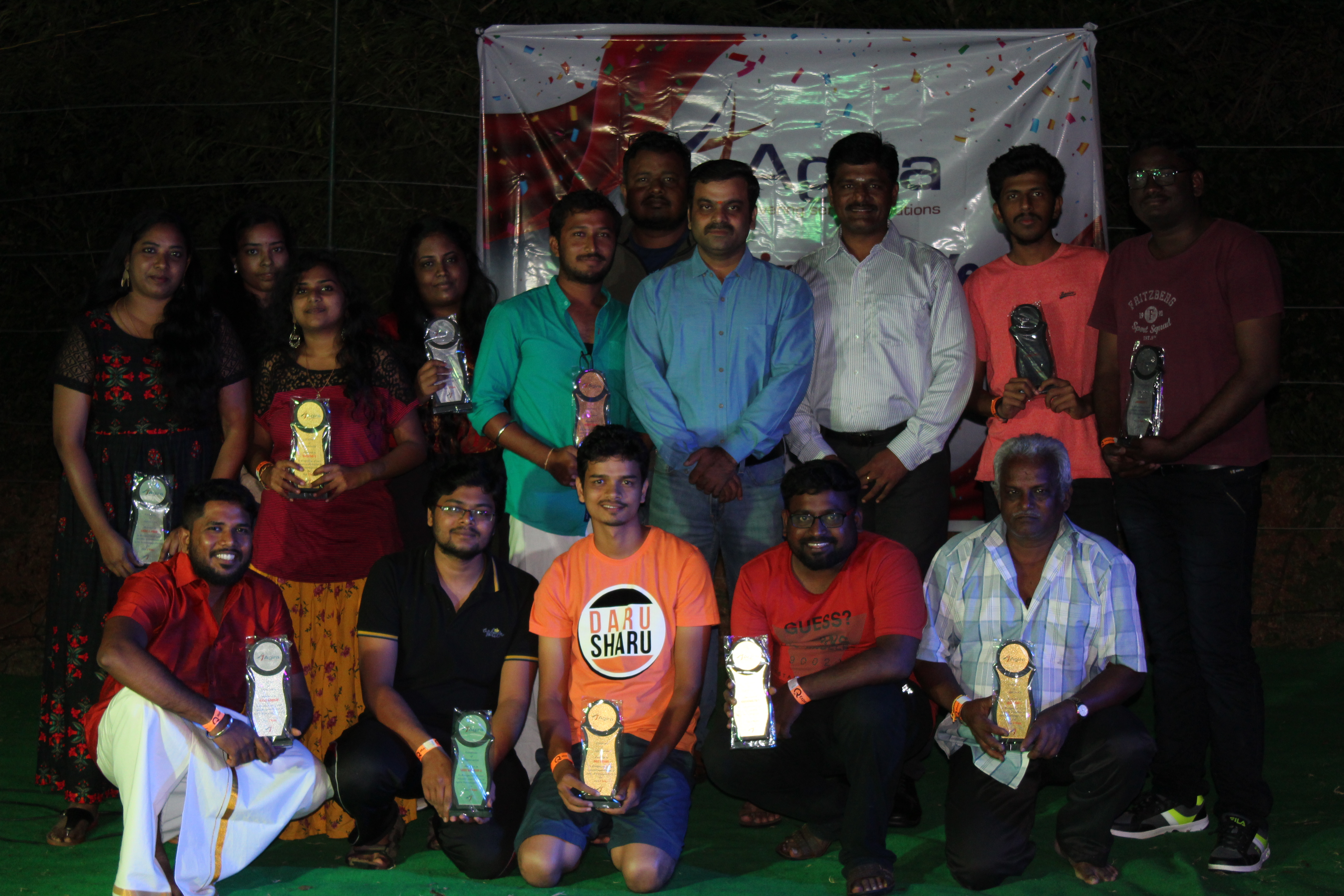 Our beautiful girls charmed the stage with their colorful performance. From the costumes to the hair ties, our girls Aishwarya, Lavanya, Ramya, Mercy, Durga Devi, and Subha rocked the stage. 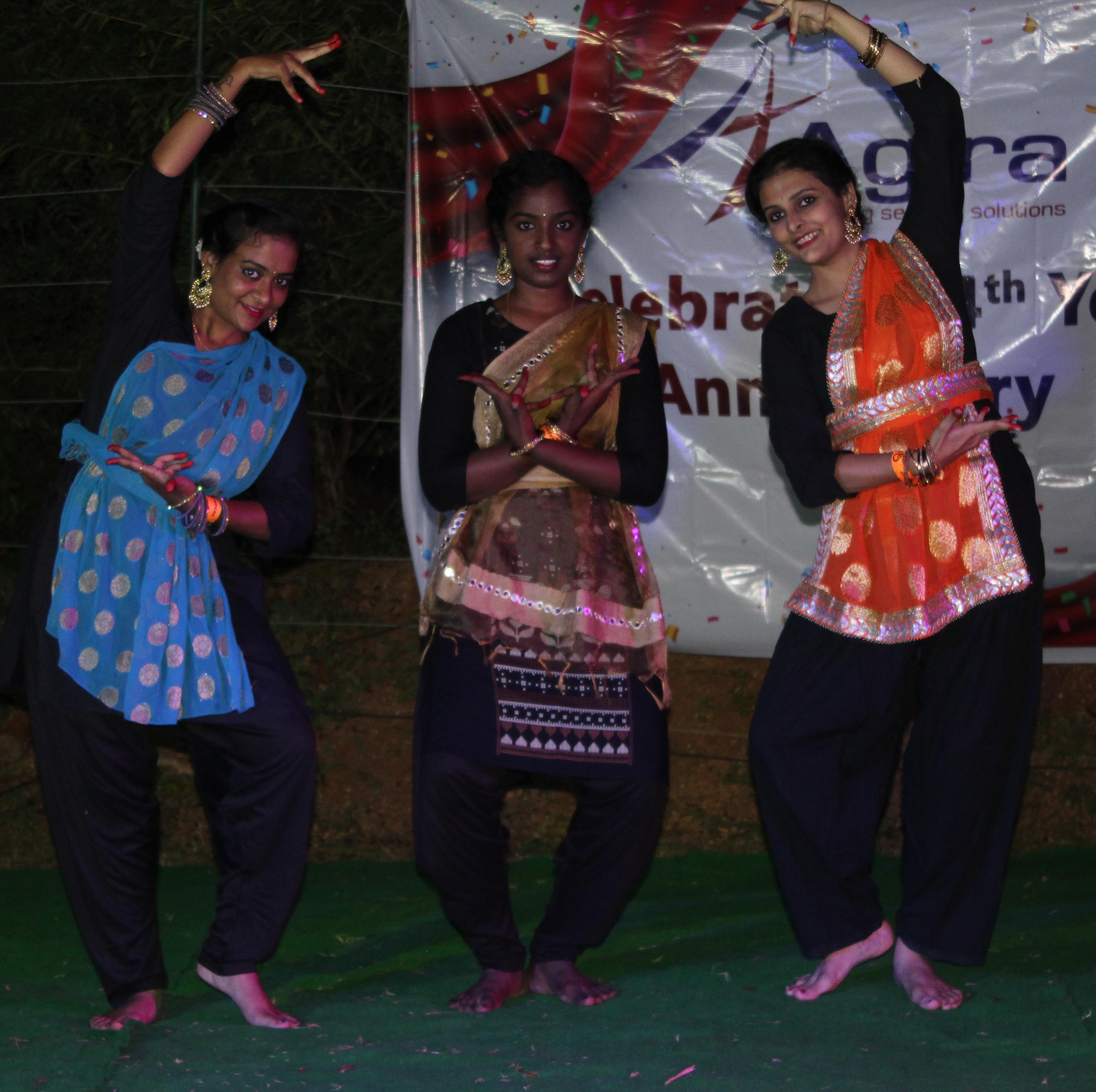 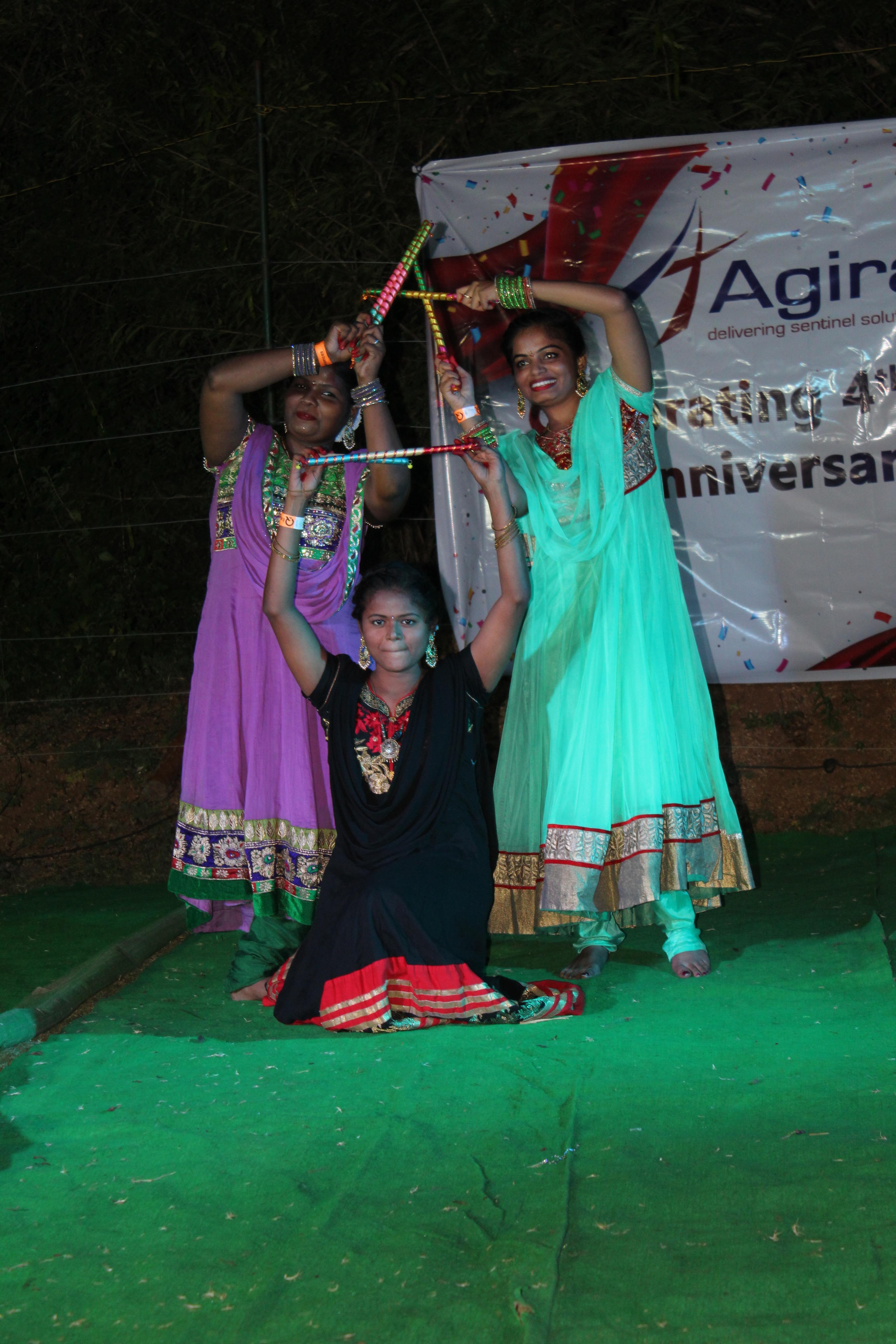 Siva Ranjani and Ramya melted our hearts with their mesmerizing classical tones. 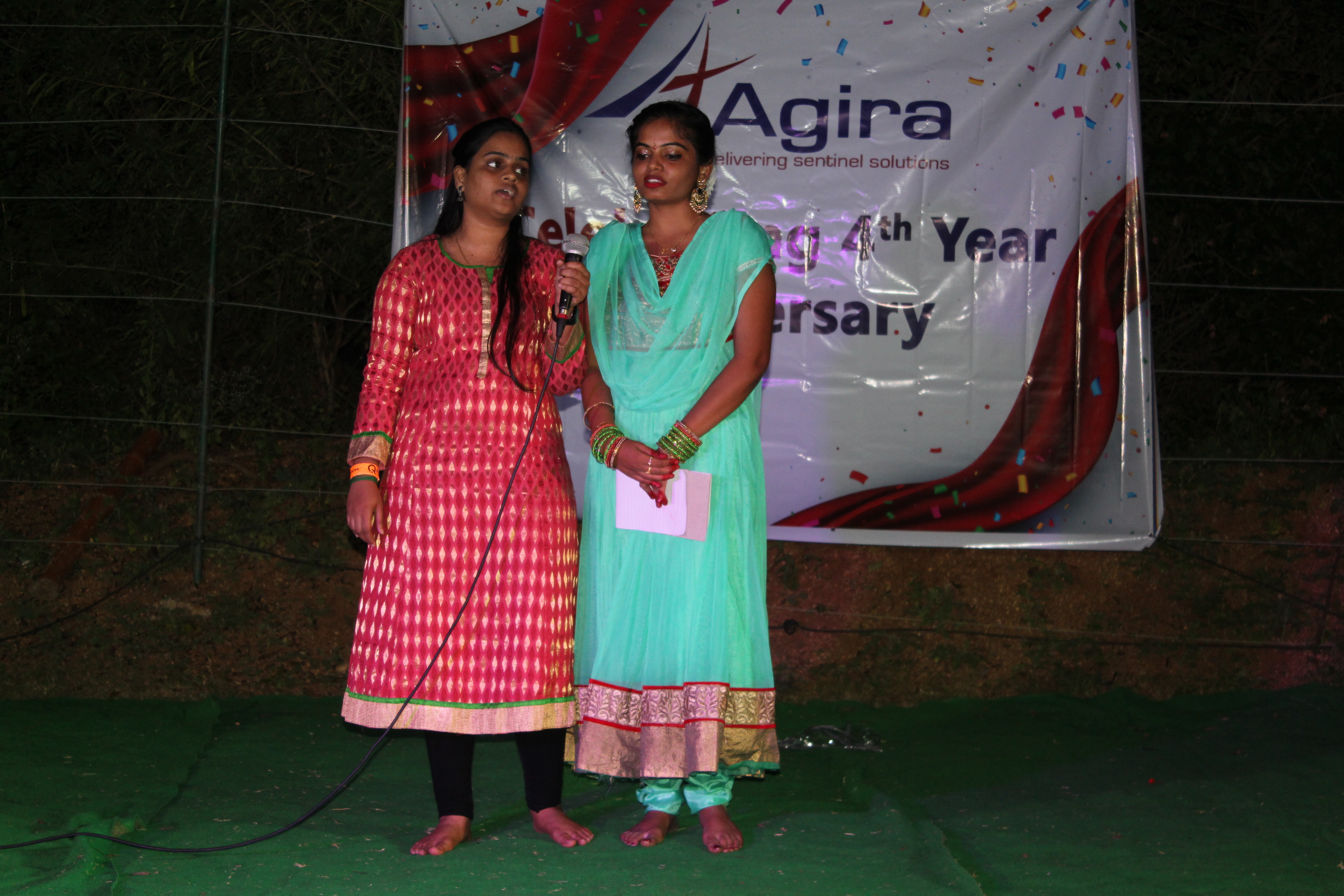 The mime team amused everyone by mimicking a day-to-day life in Agira technologies. 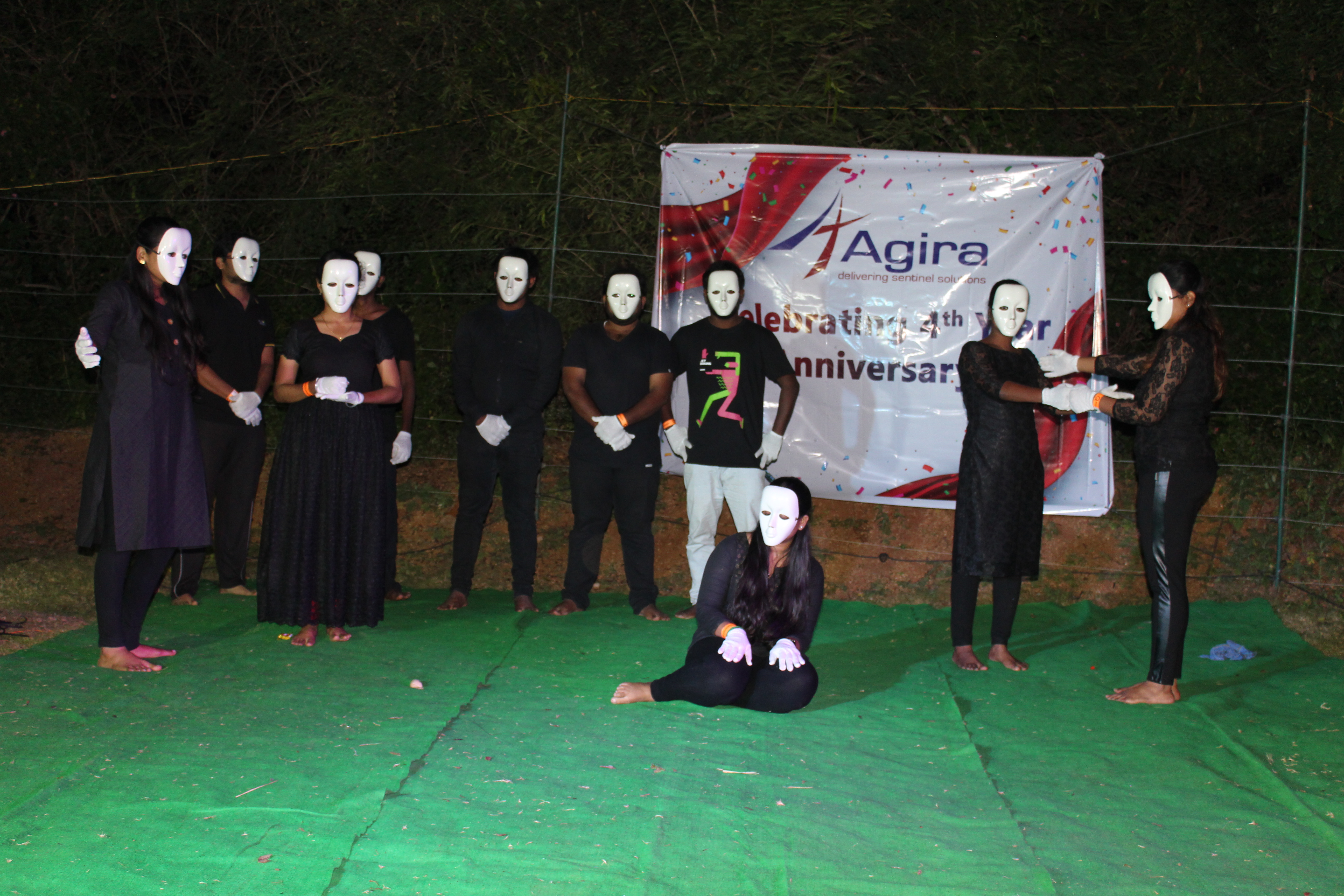 An inspirational skit was directed by Yuvraj. Mani and Preethima stole the show with their realistic acting skills.
Then, Agira’s coolest guys and prettiest girls ramp walk on stage with eccentric outfits.
The day was fun-packed and ended in the warmth of campfire.
Our curiosity to explore woke us up to try trekking on the rugged hills. It was refreshing to witness the beauty of Ramanagara until we were about to climb a steep mountain path. (What is trekking after all??). Yes, we reached the top of the hill to see bear caves. Many of us were playing mud games until the last minute before getting leaving the resort. 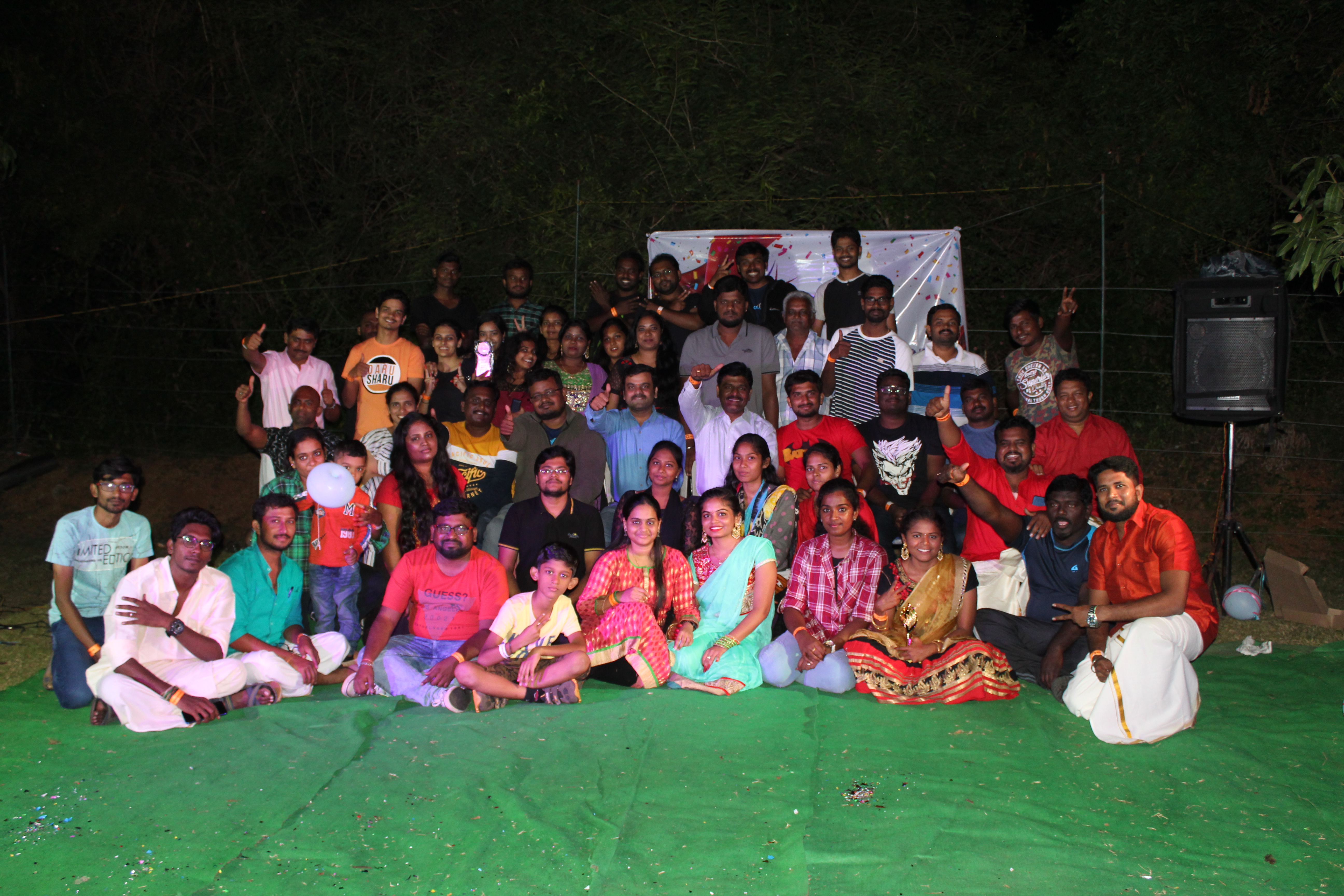 The Q Mango Forest Adventure Camp was one of our memorable outings. We enjoyed the perfect blend of adventure and relaxation and left us with exotic memories. Agira’s fourth successful anniversary celebration was full of cherishable memories.