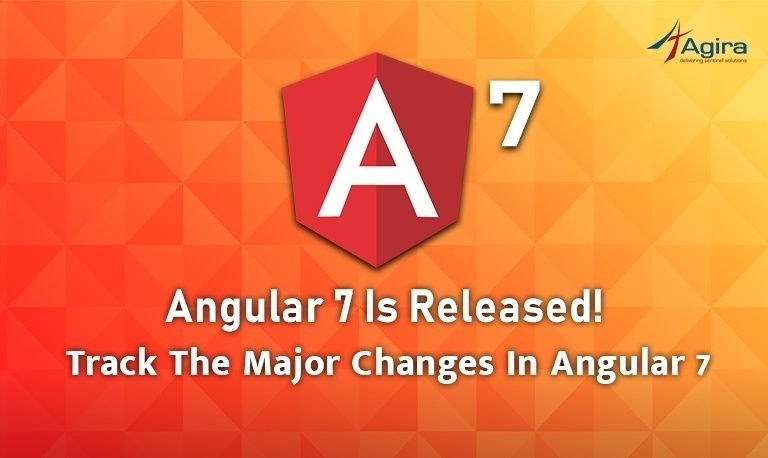 Releasing feature is not a big deal for any programming languages but what makes a deal worth is the impact of the released features should make the developers to work on it. That’s why Angular has accompanied its place still on the top! Considering it on the mind, again the team behind Angular surprised its developer’s community by introducing most satisfied features. This time Angular developers must be more attentive to check out these new features of Angular 7 because it seems the new version has been developed to have the smooth & flexible development environment for its developers.

Usually, CLI does the job of providing new interface to the existing functionalities. Now continues offering the same functionalities but this time we’re provided with the choice to choose the built-in features. It means we will be prompted with the choice to choose diverse built-in features while running the commands like ng new. From creating application to adding third party libraries, now everything aimed to make more interactions with the user so the interaction between the users and CLI will be like a close conversation between the users so obviously users will love using CLI henceforth. In addition, Google also added new schematics in it, so we will be accompanied with more schematic collections.

Follow the below command to install the latest update of CLI

Application performance is another eye-opening feature in angular 7 because even upgrade from angular 6 to 7 will not consume much time like previous versions. Other than the core features, we also got a solution for our long unanswered thread. Remember the reflect-metadata, we all must have added reflect-metadata polyfill in production which is required but affects the performance of an application. Though we all have noticed that it’s not necessarily needed to be added in production which can rely on development itself. Finally, this problem got fixed! the Angular team got a solution for us, onc you update it to 7 then automatically the polyfills.ts files will be removed by default so you can include files in the development phase. Now imagine the size of your application after removing all these files from the production environment. Of course, the size of an application will be smaller, and it will definitely boost the performance of your application.
Google also favored us with Angular budgets feature, with the improvised budget feature developers can set the budget thresholds to ensure the app size falls within the specified boundaries. Also when the initial bundle is more than 2MB, then it will warn us for maximized size, and if we choose to continue with it and if again reaches more than 5MB then again it will get us to our eyes sight and warn us by mentioning the size and difficulties. It will be easy for us to track and the size of an application.

To implement this, you just need to add few lines on your angular.json file,

By adding these, you can able to control the app size

Virtual Scrolling in Angular 7 introduced to solve the troublesome of dealing scrolling list. It especially helps the users who have got very long scrolling lists and facing difficulties in rendering all the container elements. Virtual scrolling enabling us to load and unload the element from DOM, with this you can prevent the app from being rendered by all the elements instead you can just enable the elements which are required to load. Therefore users will get smooth & easy scrolling experience even for the huge list and so scrolling is not going to scare us anymore.

Are you the one hated working with standard animation in Angular? Run out from it! You don’t want to continue with it anymore. Now you can experience the eye-catching drag & drop feature of Angular 7. This feature helps the users to drag & drop the items including records. Even you can transfer the lists between items by using moveItemInArray and transferArrayItem. It comes with interactive options like placeholders, custom drags, animations and much more. Its all in live now so just jump and play with it.

Angular 7 have also got some upgrade in dependencies,

Some Useful Resources For Angular 7

Impressed? Looking for more? wait we still need to wonder more because the angular team is working on Ivy render too! get ready to experience the next level of Angular features in future.

Was it helpful? Find more blogs on latest technologies, feed your self with more informative blogs on Angular. Also you can avail the best in class web development service from highly skilled Angular developers. For more inquiries reach us via info@agiratech.com

One thought on “Angular 7 Released! Track The Major Changes In Angular”